Difference between Army and Navy

Key Difference: The term ‘Army’ is derived from Latin word “arma” meaning “arms” or “weapons’. Army is a land based military branch is responsible for dealing with threat faced on land. The navy is responsible for conflict or threat that is on the country’s waters.

Army and Navy are types of forces that are a part of a military of a country in order to protect it from intruding forces. In the United States, these are two main branches from the five branches that is part of their military: the Army, Air Force, Navy, Marine Corps, and the Coast Guard. These branches are directly answerable to the Department of Defense, run by the Secretary of Defense. In the US, the president is the commander-in-chief of the United States Armed Forces. 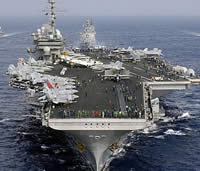 On the other hand, the Navy is armed forces that are responsible for keeping the country’s  waters safe from threat. It is mainly designed for naval warfare and keeping waters free from pirates and etc. Naval warfare include anything conducted by surface ships, amphibious ships, submarines, and seaborne aviation, as well as ancillary support, communications, training, and other fields. The offensive role of a navy is projection of force into areas beyond a country's shores, while the defensive purpose is to frustrate seaborne projection-of-force by enemies. The term ‘navy’ is derived from old French word ‘navie’ meaning ‘fleet of ships’. There are also other roots of the word in Latin, Sanskrit and Greek.

Naval warfare has been fought since the introduction of ships or water-bearing vessels, though during those times when guns or weapons could not be carried on board, warfare was conducted by trying to ram the opposite ship and getting on board to engage in hand to hand combat. The largest navy in the world is the United States Navy, which has a battle fleet greater than that of the next 13 largest navies combined. The Navy operates 290 ships, 3,700 aircraft, 50,000 non-combat vehicles and owns 75,200 buildings on 3,300,000 acres. The Army is commanded by the Chief of Naval Operations, who reports to the Secretary of the Navy. The navy owns equipment such as ships, boats, aircraft carriers, submarines and aircrafts.

Though it is beneficial to have the army, navy and air force as part of their military, for countries that are not surrounded by waters can safely eliminate the navy and focus more resources on the other branches.

I love Navy I don't know how to join Navy

I love navy .I don't know to how to join navy . please reply me.

I love the navy I'm from jamaica and can't to be over there in the navy. Its my dream to be In the navy