Difference between Capacitor and Ultracapacitor 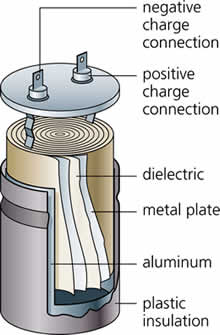 Capacitor is a device that stores an electric charge. It can be referred to as an arrangement of conductors. A capacitor stores electrical energy directly as an electrostatic field is created between two metal "plates". A capacitor’s discovery is associated with the Leyden jar. It was partially filled with water and stoppered with a cork. The cork had a way to insert a wire tightly through the centre of it. When the wire was connected to some source of static electricity, the jar gets charged.

Any conductor that came in contact with or closer to the wire discharged the Leyden Jar. The concept of capacitor originated and flourished from this concept. Now, it has become an important electronic component in the circuits. A capacitor stores electrical charge and is capable of discharging it whenever required. It blocks DC (Direct Current) and allows AC (Alternating Current) to pass through it. Some of the basic functions of capacitors include – DC blocking, coupling, filtering (tone control), smoothing (work on ripples and noise in power supplies), timing of circuits (like in the case of low frequency oscillators) and storing energy.

Construction - a capacitor is generally constructed using two metal plates or metal foils separated by an insulator called a dielectric material. Any non-conducting substance can be used as a dielectric material. However, porcelain, mylar, teflon, mica, cellulose are generally preferred. Thus, a capacitor can be defined as an arrangement of two conducting surfaces separated by a dielectric medium. A capacitor is defined by the type of dielectric and electrode material selected. It also defines the application of the capacitor. It can be connected in either series or parallel with an inductor in order to construct a resonance oscillating circuit for inductive heating.

An ultracapacitor is an innovation in the field of capacitors. The main development of the ultracapacitor related research originated in the work of Standard Oil of Ohio Research Center (SOHIO) in the early 1960s. The main difference between a capacitor and an ultracapacitor is that- it uses a very small charge separation distance that is literally equivalent to the dimensions of the ions within the electrolyte. Due to the carbon technology, these capacitors are able to create a very large surface area. Thus, it has a very high capacitance than an ordinary capacitor. These capacitors have very high energy densities in comparison to common capacitors. They are quite beneficial for hybrid vehicles.

Comparison between Capacitor and Ultracapacitor: