Difference Between Revenue and Receipt

Key Difference: The main difference between Revenue and Receipt is that receipt is the cash received and is also known as cash inflow or 'Cash Receipt' meaning cash received by the entity, but it also includes revenue and other loans that it has to repay back.Revenue means the benefits the entity has received or earned by its main business and the earning is it's own and does not need to be paid back.

Revenue is defined in economics as “ the income that a firm or an entity receives from the sale of goods or services to it's customers.The sum of revenues from all the products and services that a company provides is called as Total Revenue (TR). The entity can earn income in many ways but not every activity is it's main activity and thus not every income is revenue. For example, an apparel company can earn an income by selling some machines at a higher price than the actual buying amount, but it is not it's revenue as it's main business is selling clothes and not machines. 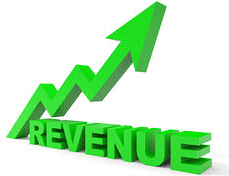 Definition of Revenue is the sum total or the income which an entity earns by providing or offering it's customer's product or services and that is credited in the entity's profit or loss account.
In general usage, the revenue is income received by an organization in the form of cash or cash equivalents. Revenue is also referred to as Sales or Turnover. Some firms may earn revenue from royalties, interests and other fees. Sales revenue is when a firm earns income by selling goods or services over a period of time. Another type of revenue is Tax revenue, where government receives from taxpayers. In more formal usage, revenue is calculation or estimation of that periodic income based on a particular standard accounting practice or the rules established by the government or government agency. The non-profit organizations, earn revenue through other mediums like earning income by fund-raising activities, donations from individuals or corporations, membership dues, support from government agencies, financial securities like investment funds, stocks or bonds, etc.

A firm also earns other types of revenues, which are from non-core business operations. For example, a firm that sells furniture would record sales of furnishing items as 'normal revenue' , but when that same firm, earns revenue or income by selling a land or by renting some area of the firm's property, will be called as 'other revenues'. The other revenue is disclosed separately on its income statement to show that it is from something other than it's core operating business. The combination of all revenue generating system of a business is called as 'Revenue Model'. Revenue is a crucial part of the financial statement of an entity, which shows an entity's performance as an indication of earning quality. The firm's performance is measured by analyzing it's asset inflows (revenue) and comparing it with the firm's asset outflows (expenses) and the result is then measured in 'Net Income'.

A firm's receipts usually refers to the cash that it receives, which is also called as Cash inflow or Cash Receipt. Receipts are also the revenue an entity earns or receives cash. It is not necessary for an entity to receive all the cash receipts as a result of earning revenue, just like it is not necessary to earn revenue in the form of cash receipts. For example, when an individual earns a receipt from the bank borrowing 1000 in cash, can be called as Cash Receipt but not as earning Revenue. When a firm earns cash receipt by selling it's product or services is called as 'Sales Receipt'. For example, when a firm earns cash by selling a disregarded or any other asset, it is called as Sales or Cash Receipt. Receipts are associated by default with money that comes into business from sales-producing activities. Receipts are also referred as expenses that has been incurred for which an entity is debited in Profit and Loss account. Receipt is defined as 'a written acknowledgement that something of value has been transferred from one party to another. Apart from the receipts received from the vendors or service providers, receipts are also issued in business-to-business dealings and also in stock-market transactions. It is also defined as 'an increase in the business's cash and cash equivalents and is sometimes also called as Cash inflow.' Cash receipts can be either increase to the business's cash or an increase to it's cash equivalents. Cash equivalents are certain financial instruments with terms less than three months length and can be converted to cash with minimal risk. Receipt is amount received from any source whether it is revenue (sales of service or product) or capital (sales of asset). Receipts are also referred to as the act of receiving something, such as incoming goods like raw materials, supplies, correspondence etc.

The cash receipt is a document proving the receivable is earned. The bank also offers a receipt, which is also called slip as a proof of money being credited or debited to or from the account. Receipts are also called as Vouchers, which are filled for a particular product or service bought or used from the vendor or that particular service provider. Vouchers involve verification signature of the concerned person and person to be given bill or for payment stamp. Cash receipt or vouchers are mostly used to keep a record of the monetary usage and verification purposes. Receipt is also used when a firm keeps an inventory as a goods receipt, which is also called as GRN denoting Goods Receipt Note. Receipts are also given to customer's which are often called as Bill, is used mainly for retail accounting by making two copies for audit purposes of the firm. Receipts or bills are also used as a underlying asset to exchange a product or service with some percentage of money or in exchange of the new product, if the product or the service is deemed as damaged or defective piece. The exchange is also done when a future contract ends for example renting furniture for 1000 for a year with 50% cash-back after one year return with no damage done by the user. and receiving a receipt or bill of the same. The receipt is the proof of the rented furniture and the statement of 50% cash-back after returning the same furniture that was rented one year back.

Comparison between Revenue and Receipts: