Difference between Earthworm and Leech

Key difference: Earthworms and Leeches are hermaphrodites, but differ in their subclasses; Earthworms fall under subclass Oligochaeta, whereas Leeches fall under Hirudinae.

Earthworms and Leeches are useful worms, which are categorized under the same class and phylum, but they belong to different sub classes. Earthworms play a vital role in agriculture, whereas Leeches have a major role in traditional medicines. 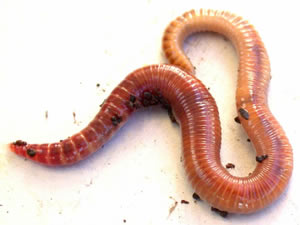 Earthworm is the common name for the largest members of Oligochaeta. Earthworms are segmented animals, which have a tube-shaped structure. They belong to the Phylum Annelida, Class Clitellata, and sub class Oligochaeta. These are commonly found in the soil, underneath the ground. They are basically type of decaying animals, and hence survive on dead organic matter. An earthworm has a double transport system composed of coelomic fluid that moves within the fluid-filled coelom and a simple, closed blood circulatory system. Its digestive system runs throughout its length of the body and it conducts respiration through its skin. They are crawlers which often come out during the monsoons. They are hermaphrodites, which means that they have both male and female reproductive organs. Their movement takes place by contraction and relaxation of their muscles. 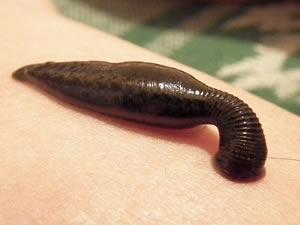 Leeches are also segmented worms, which belong to the phylum Annelida and subclass Hirudinea. As leeches fall under the same phylum as that of the Earthworms, they also possess the common clitellum, and hence are categorized as hermaphrodites. Leeches differ in other characteristics from the other Oligochaetes, such as: their external body segmentation does not correspond with the internal segmentation of their organs, and they also do not possess bristles. The noticeable feature about them is that they have two-suckers at each of their ends. The practice of leeching can be traced back to ancient India and Greece, which continued well into the 18th and 19th centuries in both Europe and North America. Hirudo medicinalis, (a type of Leech) is being used from historical times as a medicinal form, in order to remove blood from patients. Some of the leeches’ species like hematophagus, feed on blood. The reproduction in leeches is the same as that of earthworms, except that the sperms are stored in spermatophores, which are sacs outside the body of a leech. As leeches lack setae, they move with the help of the anterior and posterior suckers and longitudinal muscles along the length of their body.

Earthworms and leeches are both segmented types of annelids (segmented worms). Earthworms are used for various natural processes, whereas even leeches have medical and other uses. Earthworms survive on dead organic matter, whereas leeches thrive on live organisms. They are commonly referred to as the blood sucking creatures or worms. Earthworms are widely used in soil aeration system. They help to increase the fertility of soil, and hence are helpful in making of manures and natural fertilizers. On the other hand, leeches are applicable in blood sucking techniques and therapies involved in the field of medicine. They are preferred generally in Ayurvedic treatments. Both earthworm and leeches play major roles in their respective applicative fields. Earthworms pass the soil through their gut and extract nutrients from it, while very few types of leeches feed on blood. The rest prey on small invertebrates.

Comparison between Earthworm and Leech:

Thanks to all those that helping us to still healthy.