Difference between Embarrassment, Shame and Humiliation

Our feelings, in general, all have a purpose and are there for a reason. Each emotion of a person gives an idea of about, how he or she perceives the world and in turn, helps him or her in their chosen behavior with the world. Feelings come easy, but the tricky part is to identify the said feelings.

“No one can make you feel inferior without your consent.” - Eleanor Roosevelt. 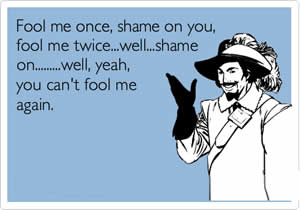 Shame, embarrassment, and humiliation are three universal emotions that are considered to the most painful human experiences. These terms rich in their emotional and social sciences meanings, are intimately rooted in religion and ethics, and are conceived and experienced differently by people all around the different parts of the world. Thus, this article helps to understand the differences and meanings of the given terms.

‘Shame’ is a painful feeling that is a mix of regret, self-hate, and dishonor. For example, a good person will feel ‘shameful’ for lashing out or doing something mean to a friend. It makes that person feel bad and regretful of their behavior. The experience of shame is directly related to self evaluation, wherein the person feels bad about themselves for their immoral actions. It brings a negative self image, where the person acts on contrary to his own values and ideas. This is more of a private feeling that is not exposed in front of the people. 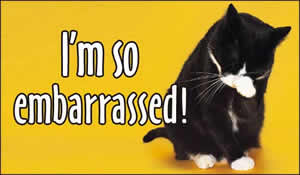 Also, a person may feel shame, when his faults are exposed to others, though it quickly turns into embarrassment. ‘Embarrassment’ is an emotional state of self consciousness that is experienced in a socially awkward condition in front of other people. It is the feeling of intense discomfort with oneself, wherein the person feels that everyone might be looking or staring at him. For example, it is embarrassing to show ones funny baby pictures to his friends, or saying something derogatory or being a rejected by another person, etc. It is a private or public affair, as there is loss of honor or dignity is involved, though amount of ‘embarrassment’ depends solely on the situation. 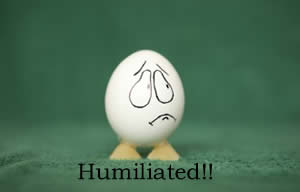 Now, ‘humiliation’ is one step ahead of embarrassment. It is described as a strong feeling of mortification that comes with loss of self-esteem and self-respect. It is the downgrade of pride and as the terms suggests, it means ‘to humble’. This feeling can be brought about by intimidation, physical or mental mistreatment, etc by others. It is public affair, wherein another person is involved to de-emphasize the ego of one person, who is said to have committed socially or legally, offensive act.

Comparison between Embarrassment, Shame and Humiliation: