Difference between ESL and EFL 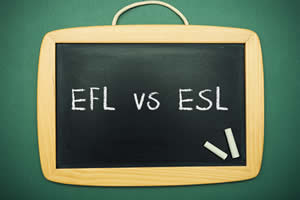 English has become an important language and it has become a necessity to learn English from the viewpoint of globalization. It has evolved by absorbing vocabulary from different types of sources. The popularity of English can be understood from the fact that people around the world find it relatively easy.

ESL (English as a Second Language) and EFL (English as a Foreign Language) are two different approaches related to English leaning or teaching. In a place where English is to be learnt by non-native speakers in an English-speaking country, ESL approach is adopted. Learning English is very important as English is a dominant  or official language of the place in which the person is residing and without proper knowledge of English one may face problems in even day to day activities.

EFL has to focus on practical aspect so that students can use it effectively. EFL can enjoy this liberty as it is not a pressing issue for EFL students. ESL teaching is concentrated on Content and Language Integrated learning rather than grammar. ESL learners want to learn English so that they can be as fluent as natives. EFL is a more universally accepted term. On the other hand, ESL’s definition is often under discussion as some argue it to be third, fourth or even fifth language for some people.

Due to these arguments, many countries like New Zealand and Ireland use the term ESOL English for Speakers of Other Languages or EAL English as an Additional Language in place of ESL.

Comparison between ESL and EFL: