Difference between Freshwater and Saltwater Pearls Pearls are composed of calcium carbonate in minute crystalline form, similar to the shell of a clam. The calcium carbonate is created in the shell of a living shelled mollusk. Formation of pearls is a rather interesting process, which occurs in clams and oysters. When a foreign particle enters the clam or oyster shell, a defense mechanism kicks in and the mollusk starts coating the particle with layers and layers of nacre, also known as mother-of-pearl. The continuous layer after layer forms a thick coat around that particle, resulting in the formation of the pearl. Pearls are generally round in shape, although they can also come in other shapes such as Baroque pearls. These days pearl mining has become a costly venture and now many people are creating pearls by creating the right circumstances.

Pearls can now be classified among two major groups: natural pearls and cultured pearls. Natural pearls are pearls that occur in the nature, where no human manipulation takes place. These are costlier in nature as they are not created in labs or controlled settings. Cultured pearls are grown in pearl farms, where humans create the right circumstances in which he pearl will grow. They manipulate the settings and decide factors such as: depth of the nacre coating, the type of water that the mollusk lives in, how long the pearl is left in the place before it is harvested, etc. 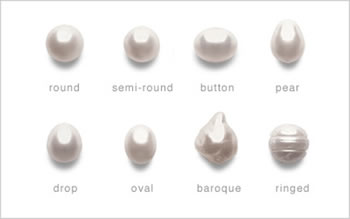 People often believe that freshwater pearls are not real and are artificial but they are just as real as saltwater pearls. The prices for the pearls different based on properties such as shape, color, size and luster. Natural pearls are often more expensive than any of the cultured ones and are also quite rare.

Comparison between Freshwater and Saltwater Pearls: