Difference Between Fuji and Fiji

Key Difference: Both the words, Fuji and Fiji can easily be confused as they both share the common factors of being a geographical location as well as both being proper-nouns. The key difference between Fuji and Fiji remains that Fuji is the highest Mountain in Japan which is known for its history and being the national symbol of the country. While Fiji is an Island country known for its scenic beauty and for being an archipelago of more than 330 islands in the South-Pacific Ocean.

Fuji (pronounced Foo-jee) also known as Mount Fuji is the highest mountain in Japan located near Pacific coast of central Honshu, just west of Tokyo at 3, 776.24 m (12, 389 ft). It is also the second-highest peak of an island (volcanic) in Asia and the 7th highest peak of an island in the world. It is a dormant or latent stratovolcano that last erupted about 300 years ago in 1707-1708. The mountain was first named as Fuji no Yama in Hitachi no kuni fudoki (73 CE), an early government record, whereas 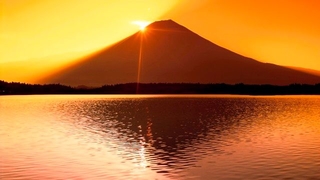 some say it is derived from an Ainu term meaning 'fire' coupled with san, the Japanese word for mountain. Mount Fuji was first founded by Nikko Shonin in 1290 on the lower slopes of the mountain and it was visible while traveling on the Tokiado road especially in 1600 when Edo (now Tokyo) became the capital of the country.

Mount Fuji is surrounded by five beautiful lakes called Lake Kawaguchiko, Lake Yamanakako, Lake Saiko, Lake Motosuko and Lake Shojiko and is made up of three separate volcanoes in the descending order: Komitake at the bottom, Kofuji at the middle and Fuji at the top. The mountains which is worshiped as a sacred mountain in Japan, stands on the border between Yamanashi and Shizuoka Prefectures and can be seen from Yokohama and Tokyo on clear days. Mount Fuji is one of Japan's 'Three Holy Mountains', along with the two other mountains named Mount Tate and Mount Haku. Fuji mountain is also considered as a Special Place of Scenic Beauty and World Heritage List added Fuji mountain as a Cultural Heritage on 22nd June, 2013. Fuji mountain is a very peculiar feature of Japan geography. Mount-Fuji is also well-known symbol of Japan with it's exceptionally symmetrical cone, which is snow-capped for almost about five months-a-year. Mount-Fuji is also frequently represented photographs as well as in art media such as poetry, films, painting, music and also issued on bank notes and postal stamps. Fuji mountain is one of the Historic Sites and is one of the most attractive tourist place in Japan for sight-seeing as well as for mountain-climbers. As per 2009, about 300,000 people climbed the mountain and records about 17.200,000 climbers per year.

The summit of the mountain has a tundra climate with temperatures very low at the high altitude and the peak is covered with snow for several months in the year making it tough for the climbers. Thus, it is most suitable in the months of July and August for the climbers to visit. Mount Fuji is also worshiped at the foot of the mountain at Sengen Jinja Shrines by early climbers before climbing up. There is also a traditional festival called 'Yabusame Festival' held in May in the shrine. The festival sees Japanese samurai's bow and arrow performance on the horse. The peak offers abundant natural beauty and the best Sunrise called Goraiko from the top with many climbers climbing the mountain only for the scenic beauty. One of the best view of the mountain can be enjoyed from Shin-Fuji Station on the right-side of the train with about 40-45 minutes journey.

Fiji also known by the Republic of Fiji is an island country which covers a total area of about 194,000 sq. kms of which land is for about 10%. The country is in Melanesia, which is a part of Oceania in South-Pacific Ocean and is about 1, 100 nautical miles northeast of New Zealand's North Island.  The island comprises approximately of 330 or 332 islands with around one-third about 110 are inhabited. The island covers about 1.3 million sq. kms of the South-Pacific Ocean. 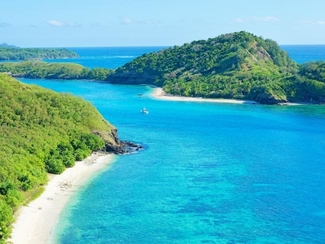 Fiji, today has one of the most developed economies of the Pacific Islands. It lies about one-third of the way from New Zealand to Hawaii and tthe extensive group of islands. The island is the product of volcanic mountains and warm tropical waters.

The majority of the Fiji's Islands were formed through volcanic activity starting around 150 million years ago with some geothermal activity still occurring on the islands of Vanua Levu and Taveuni. The climate in Fiji is tropical marine and warm all round the year with least extremes with the warm season from November to April with tropical storms and cooler season from May-June and October are nice time to visit as the heavy crowds descend or May to October in general. The peak season occurs between July and September with dry and sunny weather. The island becomes the hub of South-Pacific and mid-way between Vanuatu (Pacific Island country) and Tonga (Polynesian country).

Tourism is the backbone of the country's economy with popular regions being the the Coral Coast, Nadi, Denarau Island and Mamanuca Islands and thus the common tourist activity become Scuba Diving which offers soft coral reefs, flora and fauna. Majority of the visitors are from Australia, the United States and New Zealand. Sigatoka Sand Dunes National Park is located at the mouth of the Sigatoka River on the island of one of the main nine islands Viti Levu and is approximately 3 kms west of the Sigatoka town. The island's culture is composed of all the native Fijians, Indo-Fijian, Asian and European traditions that comprises language, social-polity, food, attire, beliefs, etc. Island being known for land of villages as well as people being recognized for their top performance is sports like Rugby which requires hand-to-hand combat skills.

Comparison between Fuji and Fiji