Difference between Heart Attack and Stroke 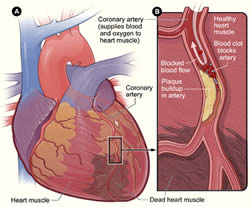 A heart attack also known as myocardial infarction (MI) is a permanent damage to your heart. In order for a heart muscle to stay healthy, it requires a constant flow of oxygen-enriched blood. During a heart attack, the blood flow to heart is blocked by plaque (plak) build up in the arteries. Plaque is hard on the outside and soft on the inside. The hard plaque on the outside cracks (ruptures) causing platelets to build up in the area and block the artery. The blood clot completely blocks the artery and deprives the heart of oxygen. The lack of oxygen causes blood cells to die. 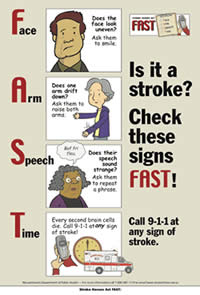 A heart attack can also be caused by a coronary spasm that occurs on and off, restricting or reducing blood supply to the heart. Healing starts occurring soon after the heart attack, however when the heart heals it leaves scarring that can lessen the heart’s pumping ability.

A stroke on the other hand can be referred to as a “brain attack”. This is similar to a heart attack, but this blocking of blood flow occurs in the brain and not in the heart. This occurs in almost the same manner, causing blood to stop flowing to a certain part of the brain and the brain cells start to die, leaving a permanent damage.

If any of these symptoms occur, the person experiencing such symptoms should be taken to the hospital immediately as time is an important factor during this condition.