Key difference: The Envy X2 is a hybrid device by Hewlett-Packard (HP). A hybrid is essentially a cross between a tablet and a laptop. The Envy X2 is primarily a tablet, but one that can be docked into a physical keyboard. The HP Envy X2 runs Windows 8 OS, which is powered by a Dual core 1.80GHz Intel Atom Processor Z2760 and a 2 GB 533 MHz LPDDR2 RAM. The Latitude 10 tablet is quite slick and light weight at 658 grams. The devices comes with a 10.1-inch IPS (1366 X 768) Wide View Angle LCD capacitive touch screen and is powered by a 1.8 GHz Intel Atom Z2760 processor. 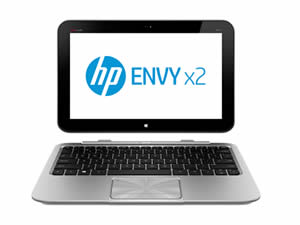