Difference between Incandescent and Fluorescent 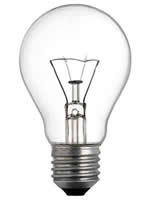 Incandescent light bulbs are the common bulbs that everyone uses in their homes. The bulbs have a very thin filament inside the glass sphere. They produce light by passing an electrical current through the filament. The filament is a very long and very thin metal wire which is made out of tungsten. It is surrounded by an inert gas, to prevent any ignitions of oxygen or other gases due to large temperatures.

A fluorescent bulb, on the other hand, uses a completely different method to produce light. The bulb is a glass tube coated with phosphor and contains mercury vapor. When electricity is supplied to the bulb, the mercury vapor gets energized. The mercury then starts sending out ultraviolet energy. The phosphor coating absorbs the ultraviolet energy and begins to glow or fluoresce. This is the light that it emits. The fluorescent bulb is commonly in the shape of a long tube, known as a fluorescent lamp. It is now also commonly available in a compact shape, known as the compact fluorescent lamp or CFL.

A detailed comparison between incandescent and fluorescent bulbs:

really, this explains the best i have heard.