Difference between Kickflip and Heelflip

Skateboarding is an extremely popular sport amongst kids, teenagers and adult skateboarding enthusiasts. Though, it was widely a hobby, now it’s a legitimate sporting event that is fast gaining global attention. The key to skateboarding is based on the tricks of the sport. The ollie, railstand, manual, the heelflip and the kickflip are some of the most popular stunts in the world of skateboarding. 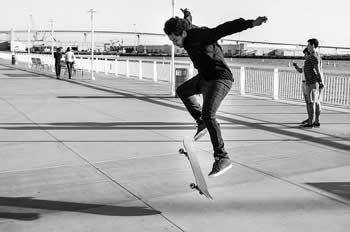 The kick-flip was invented by Mullen in the year 1982 in his Florida farmhouse. It is one of the most basic tricks that a rider learns in skateboarding. Here, the rider climbs down from the board, flips the board horizontally, takes a complete 360 degree turn, and then catches the board with his/her feet when the board re-lands on its wheels. The trick here is to flick the board by sliding his or her foot off the top of the board.

The trick can be easily performed by continuous practice. To execute the trick, the rider first ollies into the air, and lifts the back foot from the board while simultaneously sliding the front foot off the skateboard diagonally forward and towards the heel of the foot. This front foot motion flips the board over completely, and the rider stops the spin by returning his feet on the board as it nears its original position. 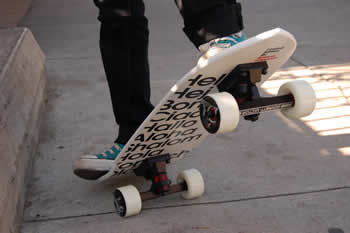 In heel-flip and the kick-flip, the former is the natural progression of the latter. Though, it is possible to learn the heelflip before knowing the kickflip in the game. These are the two most basic tricks a rider learns at the beginning of skateboarding. The hardest part of these tricks is to not lean back or push forward.

Further Comparison between Kickflip and Heelflip:

IMHO,, the back flip is far harder than the heelflip, thats just me, a professional backflipper