Difference between Liposuction and Bariatric Surgery

Key Difference:  Liposuction is a cosmetic surgery through which fat is removed from different parts of the body. It makes use of a suction device which is inserted through small incisions made on the desired part of the body. On the other hand, bariatric surgery is a surgery performed on the stomach or the intestine. It is meant for obese people and mainly work by reducing the appetite. 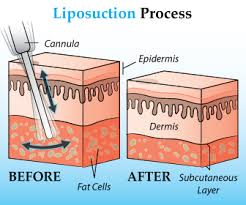 Liposuction is a cosmetic surgery which is used for removing excessive fatty tissues under the skin by suction. The main objective of this surgery is to deal with the localized areas of protruding fat. However, it should not be accepted as a method for weight control. Many people wrongly interpret it as a process which serves as a treatment for obesity.

The surgery is performed by small inconspicuous incisions, through which a thin hollow tube is inserted for getting rid of the excess fat. This cannula or tube is moved in back and forth motion in a controlled manner for loosening effect. Later the dislodged fat is taken out from the body by suction. For suctioning out the fat, a surgical vacuum or a syringe which is attachéd to the cannula, are used. This surgery is commonly performed at body parts like abdomen, flanks, back, knees, upper arms, chin, thighs and hips. 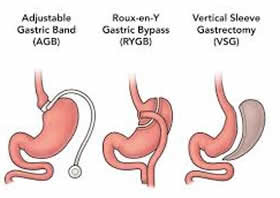 On the other hand, bariatric surgery is a surgery y which is performed for achieving a weight loss. It is done by restricting the amount of food intake and decreasing the absorption of food in intestines and stomach. It makes changes in the digestion process, and therefore results into the reduction in nutrients and calories absorbed by the body.

There are many different types of bariatric surgery techniques like sleeve gastrostomy, adjustable gastric band and Roux-en-Y gastric bypass. In adjustable gastric band, a band is placed around the top of the stomach. This way the stomach’s capacity for retaining food gets reduced. In Roux-en-Y bypass the top of the stomach is stapled, making a small pouch.  The digestive track is rerouted and the connection from the small pouch as the new stomach is made to the middle part of the small intestine. In sleeve gastrostomy, the size of the stomach is reshaped into a long tube, which reduces the size of stomach, and therefore affects the capacity  of stomach for retaining food.

Comparison between Liposuction and Bariatric Surgery: