Difference between Parachuting and Skydiving

A typical parachuting jump involves an individual’s fall from an aircraft. The parachuting technology was actually developed by the militaries, in order to save their aircrews at the time of emergencies; which afterwards became an international sport in 1952.

Parachuting is performed as a recreational activity and a competitive sport, along with the deployment of military personnel airborne forces. They are performed from both the lower and higher altitudes. If the jump is taken from a lower altitude, then the parachute gets deployed immediately, however, if the jump is taken from the higher altitudes, then the skydiver may first free-fall for approximately 1 minute, and then the main parachute would get deployed. The aircrafts required for the parachuting involves light aircrafts, such as a Cessna 172 or Cessna 182. At busier drop zones (DZs) larger turbine-powered aircraft may also be used, which involves the Cessna 208, de Havilland Canada DHC-6 Twin Otter, GippsAero GA8 Airvan or Short SC.7 Skyvan.

Parachuting involves leaping or dropping the items from a high altitude, using an aircraft. In parachuting, after the parachute opens, the jumper controls the direction and speed with the toggles, which are situated at the end of the steering lines. The toggles are further attached to the trailing edge of the parachute, from where the jumper aims towards the landing site and lands with a gentle stop. In all modern sports, parachutes have the self-inflating “ram-air” wings which provide control over speed and direction similar to the paragliders. The paragliders have much greater lifts and ranges, but the parachutes are designed in such a manner that they should absorb the stresses of deployment from a terminal velocity of approximately 120 mph. Many people make their first jump with help of an experienced and trained instructor. 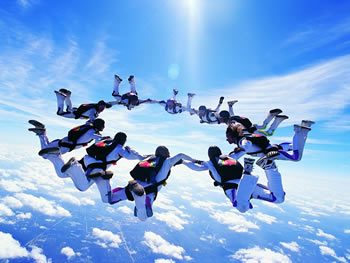 The roots of skydiving were found in the medieval times. Many medieval inventors developed rudimentary equipment, which was potentially used for this activity. Andre Jacques Garnerin jumped from a hot air balloon with a parachute, which marked the first incident of truly modern skydiving in the early 1797. From then the sport was refined throughout the 1800s. In 1900s, even the militaries adopted this activity as a sport.

Skydiving is a sport in which the participants jump or fall from the aircrafts at the desired higher altitudes. They perform an assortment of aerial maneuvers and stunt-like acrobatics before deploying a parachute. The parachute slows the descent and allow them to land gently on the Earth. People having different levels of physical fitness, participate in skydiving. Skydiving is one of the most terrifying and exhilarating type of sports. It is generally performed in two ways, individually and in groups. It is distributed in two components, which involves the actual freefall and the canopy flight phase. The actual free fall can be of long or short duration, which ends when a pilot chute deploys and pulls the parachute out from the container. Once the parachute is pulled out, the freefall finishes and the canopy flight phase begins, which ends with the landing.

The safety measurement is of utmost importance in skydiving. It was found that, the skydivers regularly check their gear to ensure it's in good shape, and most of them also carry a backup parachute. In some cases, the backup has to be deployed automatically, when a skydiver reaches at a certain altitude. So, it is found that, both the primary and backup parachutes are to be controlled with the steering lines, allowing the skydiver to control his or her descent. Numerous companies around the world offer opportunities for skydiving.

Comparison between Parachuting and Skydiving: