Difference between Puja and Bhakti

Key difference: ‘Puja’ and ‘Bhakti’ are traditional Hindu worshiping terms. These are ways of praying devotionally, which are offered to different deities in Indian Culture. Puja is a ritual prayer performed for Gods, whereas Bhakti is divine devotion towards a God.

Puja and Bhakti are ways of worshipping God in Hinduism. These words are associated with Hindu terms like, ‘shradhaa’, ‘aparna’, ‘shanti’, etc. These are observed, assumed and conducted to take blessings from Gods. These work as a belief towards God or the Almighty. These are also practiced and observed in other religions like Buddhism, Jainism and Sikhism. 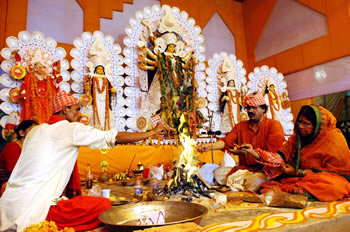 Puja in Hinduism is followed from the early Vedic periods. It is done on a variety of occasions. There are several of its forms, like the daily puja during sunrise is done by regular devotees. It’s a worshipping technique conducted in order to receive blessings from God. The puja technique may vary by region, occasion, deity honored, and steps followed. In some temples, various pujas may be performed daily at different times of the day; in other temples, it may be occasionally performed. The two main areas where a puja is performed are at home and at temples to mark certain stages of life, important events or some festivals such as Durga Puja and Lakshmi Puja. Puja is always held with ‘diyas’, the fire lighten small lamps, which are offered to God, especially on special occasions and festivals. 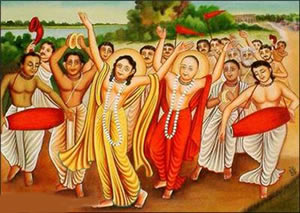 Bhakti is also spelled as Bhakthi, technically, meaning a ‘portion’ or ‘share’. Bhakti as a form of a movement is being followed from the post-Vedic times. It developed primarily during the era of Indian epic poetry. Bhakti can be used by either traditions of Hindu monotheism, i.e., Shaivaism or Vaishnavism. It also depicts the term ‘participation’, which means a person's involvement towards God and the beliefs thereby. Bhaktimarga is usually used to describe a bhakti path with complete dedication to one form of God. The term ‘bhakti’ relates to meanings like: attachment, devotion, fondness for, devotion to, etc. The prayers offered are unique and known, and majorly devoted to Gods, as they are followed by different devotees according to their own customs and traditions.

The terms, Puja and Bhakti, highlight the Indian traditions and devotions towards God. They are ways of worshipping God, wherein the devotees offer their prayers in order to attain spirituality, inner stability and blessings. They vary according to many religions and their associative systems. They were, and are followed with all devotion in every part of the country, among all religions on special occasional days and festivals. In order to illustrate, a morning prayer during sunrise is an example of morning puja, whereas a regular fast on a particular weekday can be considered as an example of bhakti, as it depicts devotion towards the purpose of the fast. The thing to be understood in this system is that these shouldn’t exceed the belief level, and should not give rise to any superstitions, rather, they should be conducted only with pure belief by knowing their meaning and attainment.

Comparison between Puja and Bhakti: