Difference between Restaurant and Cafeteria 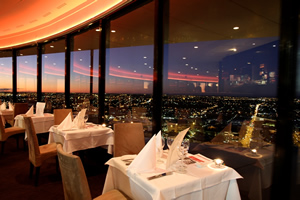 Dining out has become a part of our culture. For any occasion people choose to eat out. Any day one doesn’t feel like cooking, one can order from a fast food joint or a restaurant. On any special occasion, people choose to go to a fancy restaurant to celebrate. Food has become more important than just for survival. It is now being considered as an art. Not only does the food have to taste good and be appealing, it also has to look good on a plate. There are two main places where people can acquire food, restaurant and cafeteria. These two can be confusing as both provide food. However, they are very different from each other.

Restaurant is an establishment that prepares and serves food along with placing an emphasis on service. Restaurants usually serve food and drinks for a monetary value and the food is consumed on the premises. The restaurant can also offer take-out or delivery services. A restaurant places a great emphasis on service, where in addition to the taste of the food, the service should also be adequate. The meals are usually prepared as per order. Restaurants offer a wide menu and the pricing varies greatly depending on type of food served and the service provided. Restaurants that offer a much exotic meals and exquisite services are known as high-end restaurants and are rated from 0-5, with 0 being a fast food restaurant and a 5 being a high-end one.

The term ‘restaurant’ has been derived from the French verb, ‘restaurer’, meaning “to restore”. Professional cooks are known as chefs, with them being further classified under finer distinctions such as sous-chef, chef de partie, etc. Fast food restaurants do not have chef and they have a self-service layout, where the person has to stand in a line and get food from the counter, pay for the food and then find a place to sit. High-end restaurants have waiters/waitresses, busboy and hosts that welcome the people into the restaurant and seat them. The food is consumed first and paid for later. Seating in a restaurant can be inside as well as outside.

A cafeteria is also an eating establishment that may or may not offer a seating arrangement.  A cafeteria also serves food and soft drinks for a monetary value and the food may or may not be consumed on the premises. In a cafeteria, the food would be served on a counter where it would be set up in a buffet form, counters or stalls. The food is prepared in the back and placed in dishes on a heater in the stall. The customer must grab a tray and go through the line of the foods placed, selecting whatever they want and then pay the money towards the end. The customer may have to pay for whatever food they acquired, a fixed fee irrespective of what they picked up, or on the basis of how heavy the tray is. This type of fee changes depending on the cafeteria. General seating arrangements are made where the customer can consume their food. There is no specific seating, it is a first come basis. 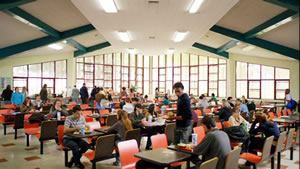 A cafeteria requires a few employees and hence it is found in large organizations that have to cater to huge crowds such as museums, hospitals, schools, colleges, office buildings, military bases, prisons, department stores, malls, etc. The term ‘cafeteria’ is adapted from American Spanish word ‘cafetería’ meaning “coffee house” and French ‘cafetière’ from ‘café’. However, in English usage, the term cafeteria is reserved for these institutions, while ‘café’ is reserved for coffee houses. Cafeteria system of serving was widely popular in the Southern United States, but it started declining following the rise of fast food chains. Fast food chains are similar to cafeterias as they also require a person to walk up to a counter and order the food and to pay for it before consuming it. In institutions such as college or military bases, other names for cafeteria includes dining hall, mess hall, chow hall, mess decks, lunch rooms (in schools), canteen (in India) and refectory (in monasteries and older universities).

There are many differences between a restaurant and cafeteria. Restaurant is mostly considered as an establishment for fine dining or a place where people would serve the customers. However, in a cafeteria people have to serve themselves from the selection of food that is already available. A restaurant has a wider menu of food that is prepared specifically for the customer. A cafeteria has a pre-set menu of four or five different foods that the user has to pick from. Also, there can be no specifications, such as a person does not have the option if they want cheese on their hamburger or no.

Restaurants also have a proper seating arrangement, where one person will be allotted his/her own table. In a cafeteria a bunch of tables are placed together and anyone can occupy any seat. This means two strangers can also be found sitting close together and eating. In restaurants, the person will consume the food first and then pay for it later, while it is the opposite in a cafeteria. Restaurants can also serve alcoholic beverages, which are not served in cafeterias.