Difference between Shawarma and Doner

Key difference: Shawarma and Doner are delicacies made from meat shaved off a rotisserie. Both are extremely similar to each other except that Shawarma is an Arab/Middle Eastern snack, while Doner is the Turkish version of it. 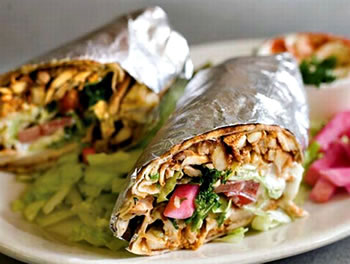 Ever since Tony Stark mentioned ‘Shawarma’ in The Avengers (2012), it has become all the more a rage. Middle Eastern recipes suddenly seemed to have found a devoted fan base, as people all over the world have tried and liked these delicacies. Doner, or doner kebabs originally, are also cooked on a principle that is very similar to cooking shawarma. Many fast food eateries and multi-cuisine restaurants have started to serve Doner and shawarma, if they weren’t serving them already.

Shawarma is basically a meat recipe, but its vegetarian variant is also available in some countries. The meat used for making shawarma is actually spit roasted on a rotisserie. The duration of this process could even be for a whole day. As the spit rotates, all sides of the meat get roasted, which is then shaved off as strips to serve as shawarma. Though these strips can be served with condiments and accompaniments on a plate, they can also be wrapped up like a sandwich. A shawarma wrap looks more like a roll and is also called a wrap.

Likewise, doner is also a meat delicacy that is prepared from spit roasted meat. However, meat used in making doner is placed in an inverted cone shape on the rotisserie. The rest of the process remains quite the same, i.e., the meat is shaved off in the form of slices and combined with various sauces and other accompaniments to serve on a platter. Or else, doner is also served as a sandwich, using flatbreads such as lavash or pita. While shawarma is topped with an eclectic mix of ingredients such as tahini, hummus, amba, pickled turnips, etc., doner is served along with tomatoes, onions, pickled cucumber, chili, etc. 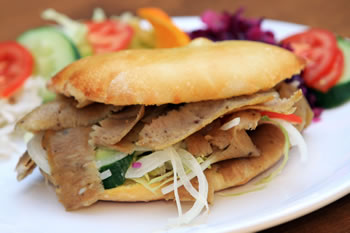 Apart from their preparation and their make, people confuse them for some other reasons as well. While serving these dishes as a wrap, pita bread is extensively used for this purpose. So just by looking, one won’t be able to tell the difference between them, unless he/she knows the ingredients present inside. Secondly, both these delicacies come accompanied with vegetables, so telling one from another by presence of vegetables is also fairly tough.  Also, the meat used in shawarma and doner is roasted to the maximum. Sometimes, the meat is a mixture of lamb, beef, veal, goat, etc. This too makes it difficult to differentiate between shawarma and doner.

Therefore, as it is pretty evident, differentiating between these two can be pretty exhausting and probably calls for a shawarma or a doner itself to redeem some lost energy!

Comparison between Shawarma and Doner: