Difference between Sociopath and Psychopath

Key Difference: Sociopath and Psychopath are two terms that are often used to describe people with antisocial personality disorder. Most psychologists avoid using the terms sociopath or psychopath. However, the terms have developed to take on certain contexts and have evolved to define someone who depicts certain specialized behaviors. 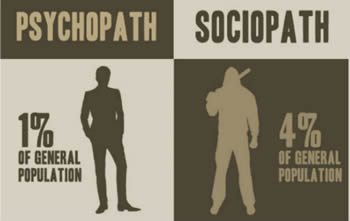 Sociopath and Psychopath are two terms that are often used to describe people with certain characteristics. The terms are primarily related to the field of psychology, however, they are often used out of context by regular people to make a point about someone, even if they have never been diagnosed as a sociopath or a psychopath.

However, doctors do not actually diagnose people as sociopaths or psychopaths. The terms are more colloquial, the official diagnosis is antisocial personality disorder. Sociopaths and Psychopaths fall on different parts of the spectrum of antisocial personality disorder. Due to this, and the fact that they behavioral patterns tend to be quite similar, the terms are often confused. This is further not helped by the fact that most people do not have an adequate understanding of who or what a sociopath or psychopath is.

Most psychologists avoid using the terms sociopath or psychopath. The official definition is someone who is diagnosed with antisocial personality disorder. Technically, the words are used primarily by the general public and are interchangeable. The Diagnostic and Statistical Manual of Mental Disorders (DSM) defines antisocial personality as someone having 3 or more of the following traits:

However, the terms have developed to take on certain contexts and have evolved to define someone who depicts certain specialized behaviors that fall under the heading of anti-social. The primary distinguishing factor about sociopaths and psychopaths is that they do not react to situations in a way that most common people will. They usually have a very weak sense of right and wrong, and cannot understand why certain behaviors, such as lying or cheating are bad or wrong.

This is especially true for psychopaths, as they often do not have a conscience which helps them distinguish between these behaviors. However, the psychopath is be more likely to construct a complex scheme or plan and to carry it out, whereas the sociopath is more driven by impulsivity making rash decisions as they see fit. 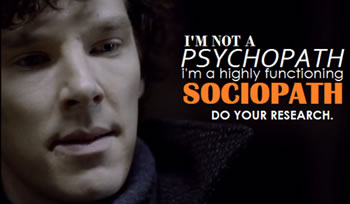 The problem in distinguishing between the terms comes from the fact that there is no direct consensus between psychologists about the qualities of a sociopath and a psychopath. While, sociopaths and psychopaths are more likely to display certain traits and characteristics, they may not exhibit all of the telling characteristics, or may exhibit them

In fact, a number of sociopaths and psychopaths never get diagnosed, primarily because they don’t think that there is anything wrong with them, and secondly because they are so good at hiding their traits so that no one can find them out. In fact, the primarily instinct of psychopaths it to act like a regular person; they will feign emotion, remorse, love, etc., anything to go undetected. The only time they actually even go to a therapist is because they are forced into it either by their loved ones or by a court order. Even when they do attend therapy, they play their part of an ideal patient as to make the therapist believe that they have been rehabilitated.

It should also be noted that unlike how sociopaths and psychopaths are depicted in films and on television, they are not always violent or evil murdering villains. There are millions of people that are living with a personality disorder, and not all of them are serial killers. However, some do tend to act out, at times rashly and like to live on the edge, which may sometimes lead into trouble with the law. Still, most of these are often misdemeanors or small crimes. Majority of the people with antisocial personality disorder are just like everything else, and are just trying to live their lives to the best of their abilities.

Comparison between Sociopath and Psychopath: