Key difference: The Xperia S features a 4.3-inch TFT touch screen with shatter proof sheet on scratch-resistant glass. The display provides an impressive 342 ppi density and is powered by a 1.5 GHz Qualcomm Dual-core processor. The Alcatel One Touch Idol Ultra features a 4.65 inch HD AMOLED capacitive touchscreen with a resolution of 720 x 1280 pixels. The phone is powered by Dual-core 1.2 GHz processor on a MediaTek MTK 6577 and 1 GB of RAM. The phone has a width of 6.45mm, which has led the company to tout it as the thinnest smartphone on the market. 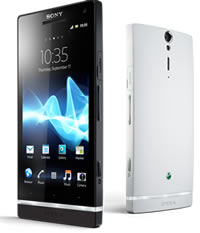 Alcatel-Lucent is a global telecommunications equipment company based in Paris, France. It is best known for providing telecommunications solutions to service providers, enterprises, and governments around the world. In addition, they also focus on fixed phones, mobile phones, converged networking hardware, IP technologies, software, and services.

The Alcatel One Touch Idol Ultra features a 4.65 inch HD AMOLED capacitive touchscreen with a resolution of 720 x 1280 pixels. The phone is powered by Dual-core 1.2 GHz processor on a MediaTek MTK 6577 and 1 GB of RAM. The phone runs on Android OS, v4.1 (Jelly Bean).  Alcatel One Touch Idol Ultra also features an 8 MP primary camera with digital zoom and LED flash, as well as 1.3 MP secondary front-facing camera for video calls. The phone comes with 16GB of internal storage, of which 13.3 GB is available to the user. The device also supports MicroSD to expand external usage up to 32 GB.

The phone has a width of 6.45mm, which has led the company to tout it as the thinnest smartphone on the market. However, to get this accolade of the ‘thinnest smartphone’, the device has had to compromise on some matters, such as the phone does not feature an audio jack. The phone does come with a USB to 3.5 mm jack adapter, which means that the USB port doubles as an audio port.

The information for the detailed table about the two phones has been taken from Sony Mobile website, the Alcatel One Touch Idol Ultra website and GSMArena.com