Difference between Submarine and U-boat 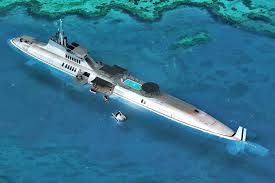 A submarine is a watercraft capable of operating underwater and at the surface. It consists of a hull which contains an air space. This structure is designed so that it can bear deep ocean pressures and can move underwater.

The shape of a submarine is typically like the body of a whale which is long and rounded at each end. It is also known as the teardrop hull desgn. They are also equipped with a type of fin on the topmost section of the submarine. It is actually the periscope. The motion of submarine related to floating or submerging activity depends upon the ship’s buoyancy, controlled by ballast tanks. The hull outer shell is basically a double steel shell.

The inner structure consists of all the necessary machines required for the movement of the submarine. It also contains living quarters for the submarine crew. In appearance it looks like a tube structure. The outer shell consists of ballast tanks. These tanks are opened and filled with seawater. If the submarine needs to be moved at the surface, seawater is rushed out of these tanks and in place of sea water, compressed air is inserted into the tanks.

U-boat, the term is basically a short word for Underseeboot meaning undersea boat. These boats were invented by the Germans, and caused a lot of destruction during world war I and world war II. These boats underwent a lot of revisions throughout their lifecycle. With the advancement of technology, more advances and powerful engines were used with stronger presser hulls. Marc VIIC/42 was a U-boat with these strong and powerful specifications.

These boats can be classified into categories of coastal boats, long range boats, Atlantic boats, special boats, walter u-boats, etc. These U-boats can now be seen in museums of Germany, USA, Britain and Finland. These boats were used for torpedo attacks, minelaying (dropping mines on ocean and coastal floors), and when not in war, used for export and trading.

During the time of World War II, around 1100 boats were built over the period of 6 years. These submarines operated in almost all oceans. The year 1943 changed everything, and the glorious U-boats became incapable to fight new and revolutionary submarines of its enemies. 80 percent of these boats got destroyed during this time. Thus, all U-boats are submarines. However, all submarines are not U-boats.

Comparison between Submarine and U-boat:

you dont define at all whats an u boat, whats the key difference between the u boat and a submarine? u only say that uboats where invented by germans as your definition.