Difference between Waxing and Shaving

Key Difference: Waxing is a form of semi-permanent hair removal that is used to rid unwanted hair and it results the hair being pulled out of the root. Shaving is another form of hair removal, which only removes hair from top of the skin, while leaving the root intact.

Waxing and shaving are two different methods of removing facial and body hair. They can be done in almost everywhere on the body. Shaving and waxing are done by both males and females, while males prefer shaving to waxing. Both of these are completely different and also have different results.

Waxing must be done by a professional at least a first few times, before the person learns to do it at home, specially dealing with hot or strip wax. Although waxing is painful, it is considered more beneficial to shaving. When waxed, the hair is pulled from the root, resulting in the weakening of the root; the hair that re-grows is usually thinner and weaker. Waxing can also result in ingrowth in certain areas, ingrowth is when hair grows under the skin and require exfoliating to remove from under the skin. 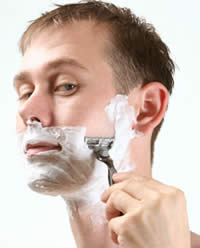 Shaving is another form of hair removal, which only removes hair from top of the skin, while leaving the root intact. Shaving requires using a blade or razor in order to cut the hair to the level of the skin. Shaving is commonly used by men to remove facial hair such as beard and mustache, but is also prominently used by women to remove hair from legs, underarms and bikini areas. Various different razors have been developed in order to make shaving easier and get a closer shave. Blades include straight blade, safety blade or electric razor.

Three different methods of shaving includes manual shaving which uses the straight blade that is seen in old movies, wet shaving, which uses safety blade and shaving cream, or dry shaving which can be done using trimmers and electric razors. Shaving is pretty painless if done right, but can cause razor burns, razor bumps and cuts. Shaving also enables hair to re-grow thicker and sturdier.

Shaving and waxing are people’s choice and depending on how much pain a person can handle, they should take up shaving or get waxing done.