Difference between Wolf and Jackal

Key difference: Jackals are scavengers, omnivores, and predators of small to medium-sized animals. Wolves are bigger than jackals and have a more progressive form. They are better adapted to hunt larger animals, and are more social in nature.

Wolves and jackals are different species in the same genus, Canis. Jackals are scavengers, omnivores, and predators of small to medium-sized animals. Wolves are bigger than jackals and have a more progressive form. They are better adapted to hunt larger animals, and are more social in nature with advanced expressive behavior.

The wolf is considered one of the biggest members of the canine family and one of the most popular animals on the planet. It is one of the most well researched animals and probably has the most books written about it. It is the sole and direct ancestor of the dog and hence is able to breed with dogs to produce hybrids. It is currently classified as Least Concern to be extinct or endangered by the International Union for Conservation of Nature (IUCN), despite the fact that they have been despised and persecuted by most humans.

Jackals on the other hand are smaller than wolves, and are more apt at hunting small mammals, birds and reptiles. They have also been known to scavenge, feeding on dead animals, or on leftovers of other’s hunts. There are three main types of jackals, the golden jackal, the side-striped jackal, and the black-backed jackal. The black-backed and side-striped jackals are more closely related to each other than they are to the golden jackal, which is closer to wolves, dogs, and coyotes. The jackal is listed by the IUCN as least concern. 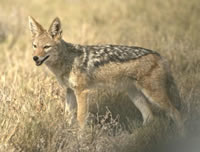 Jackals are often depicted as clever sorcerers in Eastern myths. In ancient Egyptian religion, the god associated with the afterlife is Anubis, a jackal-headed god. The jackal is also mentioned approximately 14 times in the Bible. It is frequently used to illustrate desolation, loneliness and abandonment, with reference to its habit of living in the ruins of former cities and other areas abandoned by humans.

The side-striped jackal mainly lives in wooded areas, unlike other jackal species. It is the least aggressive of the jackals and rarely preys on large mammals. The black-backed jackal is the most lightly built jackal, and is considered to be the oldest living member of the canine family. It is the most aggressive of the jackals and has been known to attack animal prey many times its own weight. It also has more quarrelsome intrapack relationships. It has a widespread range and adaptability, but it is still persecuted as a livestock predator.

The golden jackal is known as the heaviest of the jackals. Genetically, it is more closely related to the gray wolf and the coyote. It has a widespread range in areas with optimum food and shelter. The golden jackal is a social species, whose basic social unit consists of a breeding pair, followed by its offspring. It is highly adaptable and is able to exploit many food types, from fruit and insects to small hoofed mammals.

A detailed comparison between the wolf and jackal: