Difference between Habit and Addiction

Key Difference: Habit is a behavior pattern developed by frequent repetition of the act over and over to the point the brain does it automatically. An addiction is a compulsive need of a certain thing or substance to the body, which when deprived causes horrible effects. A habit can be controlled or modified, while addiction cannot be controlled and requires professional help for modification.

The difference between Habit and Addiction has been under constant debate. There is a fine line between habit and addiction, and if crossed a habit can easily turn into an addiction. In order to understand the difference, let’s look at the terms separately. 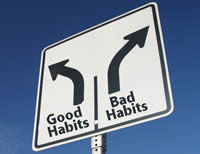 According to Merriam Webster dictionary, a habit is defined as, “a behavior pattern acquired by frequent repetition or physiologic exposure that shows itself in regularity or increased facility of performance; an acquired mode of behavior that has become nearly or completely involuntary.” A habit can be made from constant repetition to the point where a person is not even aware that they are doing it, ex: biting nails, taping their feet, etc. Habits can be both positive as well as negative, but they are not destructive in nature. The act gets imbedded in the brain after continuous repetition that the brain automatically sends signals to the body to perform that act.

An addiction is defined as, “compulsive need for and use of a habit-forming substance (as heroin, nicotine, or alcohol) characterized by tolerance and by well-defined physiological symptoms upon withdrawal; persistent compulsive use of a substance known by the user to be harmful.” An addiction is an extreme form of habit, and the fine line ends when a person loses control over the act. Most addicted people know that they are addicted to certain substances, but they can not turn away from that act or substance even if they want to. During an addiction, a person is willing to go to great lengths in order to consume that substance. Addictions also have horrible withdrawal effects. A person, who suddenly stops drinking after being addicted to it for a certain number of years, exhibits psychological and physical effects. An addiction also affects a person’s memory, ability to make decisions and learn.

A habit can be changed or modified, while addictions are hard to let go off and require professional help; but both require determination and hard work. Habits are developed from people we meet, actions we perform or decisions we take, while addiction are habits that are taken to the point where the person can no longer live without it. The most dangerous fact about an addiction is that most of them cause your body to deteriorate and can also cause death in the long term. In order to tell habit and addiction apart, there is a simple test. Can the person live without it? If something is a habit and it is stopped or skipped one day (ex: biting nails), it won’t cause any physical or psychological effects. If it is an addition and is skipped a day, it can cause withdrawal effects.

But why is biting nails only a bad habit and no addiction? Most of the people doing that, have a real need to do so and can´t just stop in a day? I know it´s hard to tell where habits end and addictions start & it´s very interesting to think about such things but in my opinion this example is wrong.

I have an unusual addiction