Difference between Wrestling and Judo

Key difference: Wrestling and Judo, both are two different types of combat sports. The main difference between the two is in their techniques and method of fighting.

Wrestling and Judo both are combat sports that involve martial arts. Although they are pretty much the same, there are a few differences between the two forms of sports. 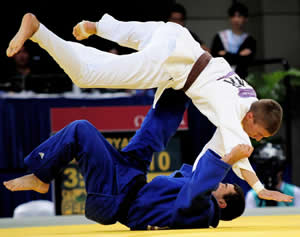 Judo is a combat and modern martial art form of sport. During 1882, Jigoro Kano created this form of sport in Japan. It is an Olympic sport.

It is a competitive sport, where the objective is to throw or takedown an opponent to the ground, immobilize him or subdue an opponent with a pin, or force the opponent to submit with a joint lock or a choke. Strikes and thrusts by hands and feet are a part of judo. In the pre-arranged forms, known as “kata”, defense weapons are used, but those are not allowed in judo competition or free practice. A judo practitioner is called a judoka.

Judo is an art combat form based on techniques. There are three different types of techniques:

Judo is mostly known for throwing and grappling techniques. Each technique has three distinct stages. The stages involved are: the initial balance break, the act of turning in and fitting into the throw, the execution and completion of the throw. To get these techniques right, Judo practitioners devote a portion of each practice session so that they can be practiced without a significant risk of injury.

Judo, being a sports category in Olympics, is required to follow a set of rules. Penalties are given for using prohibited techniques and fighting is topped if the participant is outside the designated area.

Judo is a hierarchical and traditional art form. It is taught as an art in many countries. A judo teacher is called sensei. Judo practitioners traditionally wear white uniforms called keikogi; it is a traditional kimono fastened by a colored belt.

Wrestling is a form of combat sport, which involves clinch fighting, throws, joint locks and take downs. It involves a grappling type technique for fighting. It is a physical competition between two or more competitors, who fight each other in an attempt to gain and maintain a superior position over other. 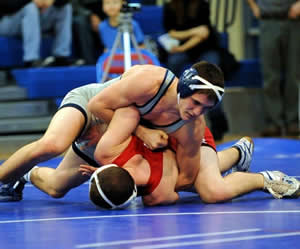 Wrestling represents one of the oldest forms of combat. Its origin dates to 15,000 year old cave paintings from Egypt, Babylon and France. Over the centuries, the popularity of wrestling grew and now has its own international category in the Olympic Games for all age-levels. Wrestling disciplines are broken down into two categories:

The international wrestling disciplines are for both men and women. This type of wrestling includes offense, defense and grappling techniques. Depending on the weight and height of the athletes, wresting takes place according to different categories. The main objective is to bring the opponent to the ground, push them out of bounds or pin their shoulders to the ground. Wrestlers wear spandex or athletic shorts during a fight, which helps in quick movements.

Folk wrestling describes a traditional form of wrestling, which is unique to a culture or geographic region of the world. It does not have any rules. A few examples of folk style wrestling are pehlwani from India, penjang gulat from Indonesia, schwingen from Switzerland, tigel from Ethiopia, shuai jiao from China, and ssireum from Korea.

In wrestling, MMA is a form of combat grappling that incorporates the Martial Art techniques in its system. Combat grappling is a realistic form of self-defense that covers all the aspects of standing and ground fighting, thus making it perfect and safe to use for military, police, and security training.

Comparison between Wrestling and Judo: