Key difference: Coffee is a popular beverage, known and consumed worldwide. It is a brewed beverage prepared from roasted or baked types of coffee shrub seeds; these seeds vary in species and hence there are several types of different coffees known and preferred around the world. Some of the most famous and consumed coffee types and styles are listed below.

Coffee is the most preferred and famous hot and cold beverages among the various drinks. Coffee available in the market comes with several types and varieties; hence these are consumed according to an individual’s style and taste. The beverage is prepared by using the coffee beans which are obtained form several species of an evergreen shrub of the genus Coffea. Coffea arabica, and the "robusta" form of the hardier Coffea canephora are the two most common sources of coffee beans which are highly regarded and preferred.

Coffee types differ in taste and the way of their preparation. Every individual coffee is a blend in itself, with mouth watering taste and flavor. In the world, coffee as a beverage is consumed in almost all parts; and these vary in their type, availability and nature. Today, coffee is the most privileged drink consumed by everyone. Some of the most common and famous coffee types are listed below in the article.

Comparison between different types of Coffee: Caffè Americano, commonly known as “Americano”, is a type of coffee which is prepared by adding hot water to espresso. It has same strength of taste as that of drip coffee, but this coffee type varies in its extra-ordinary flavor. The strength of an Americano varies with the number of shots of espresso added. It’s a famous beverage in the United States. The coffee taste differs according to the amount of espresso added to water, hence it is classified as: 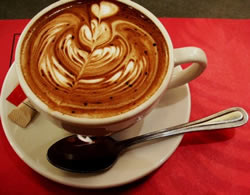 Café au lait is a traditional French method of preparing a coffee with milk at both, homes and European Cafés. In northern Europe, café au lait is the name most often used in coffee shops for what other places is a 'caffè latte'. "Café au lait" stems from the same continental tradition as "caffè Latte" in Italy, "café con leche" in Spain, "kawa biała" ("white coffee") in Poland, "Milchkaffee" in Germany, "Mèlange" in Austria, "koffie verkeerd" in Netherlands, and "café com leite" in Portugal, all these simply means to coffee with milk. In the US, 'café au lait' is defined as a coffee beverage consisting strong or bold coffee. 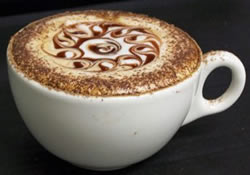 A latte is a portion of espresso and steamed milk, generally in a 1:3 to 1:5 ratio of espresso to milk, with a little foam on top. This coffee type is similar to that of the Portuguese Galão. 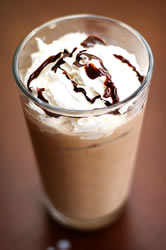 Café mocha is a form of caffè latte. It is prepared by typically adding one third espresso to two thirds steamed milk, with a chocolate portion. Typically, this coffee is in the form of chocolate syrup, although other vending systems use instant chocolate powder. Mochas may contain dark or milk chocolate. The coffee type is known with different coffee names in different regions. One of the mocha types is "Cafe borgia" with orange rind or with an addition of orange flavors. This is often served with whipped cream and topped cinnamon. 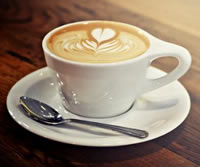 Cappuccino is a coffee drink made with espresso, hot milk, and steamed milk foam. Cappuccino is different from caffè latte, as it is prepared with much less steamed or textured milk than the caffè latte.  One of the amazing thing about Cappuccino is that it usually exceeds the height of the coffee cup, as its foam level ups above the side of the cup. Traditionally, it is offered in a porcelain cup, as it has a good heat retention capacity than the glass or paper. 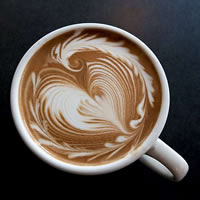 Doppio is extracted using a double filter basket in the port filter. Doppio in espresso is considered to be a double shot. 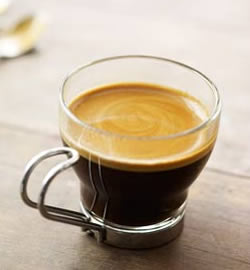 Espresso, a concentrated beverage is made with a different method. It is brewed by forcing a small amount of nearly boiling water — about 86 to 95 °C (187 to 203 °F) under pressure through finely ground coffee beans. This beverage is quite thick in nature than normal coffee. It is a blend of higher concentration of suspended and dissolved solids, and cream; as a result a creamy texture forms due to the pressure in the cup. Espresso is the base for other drinks, such as the latte, cappuccino, macchiato, mocha, or Americano. 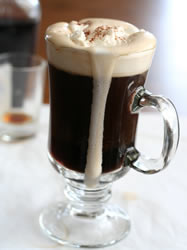 The name Liqueur coffee clearly highlights its ingredients. It is a coffee type brew with 25 ml shot of liqueur. Usually, the coffee is offered in a clear and clean preheated liqueur coffee glass with the coffee and cream separated for good visual and taste effects. On the brew a fresh chilled, additive free, slightly whipped cream is then poured carefully over the back of a cold teaspoon, so that it floats on top of the coffee and liqueur mixture. The sugar in the coffee helps the cream in the coffee to float on the top which looks beautiful. Other such Liqueur coffees are: 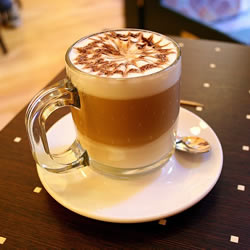 Caffè macchiato- Macchiato means 'stained’ is a mixture of Espresso and dash of foamed milk. Its ingredients are same as that of Cappuccino, but it tastes much stronger and aromatic than Cappuccino. In this coffee, the milk is foamed directly into the espresso cup, which is then put under the coffee outlet. After that, the espresso is drawn into the cup, following the sprinkles of cocoa over the drink. Often the process is reversed and milk foam is floated on top of extracted coffee. Ristretto is a too short shot of espresso coffee. Here, the water comes in direct contact with the grinds, due to which the caffeine is extracted, which further reduces the ratio to the flavorful coffee oils. The resultant shot so formed is bolder, fuller, with more body and less bitter. In short, Ristretto just means less water and double espresso around 60 ml (2 fl oz). 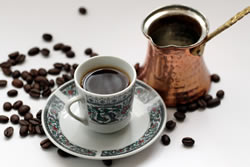 Turkish coffee is prepared from the Turkish coffee beans, which are grounded and pounded into fine powder from.  The coffee preparation consists of immersing the coffee grounds in water which is most of the time hot but not boiling for long enough to dissolve the flavor some compounds. Followed by a prolonged boiling, which gives an unpleasant "cooked" or "burnt" taste, very brief boiling is not done.

Coffee types and ranges are vast, differing regionally and their availability. From the previous good old times, coffee has always been a most privileged and appreciated drink and will also always be.

Amazing post, These are the best coffe types I ever seen, Now I want to try some of them.

Who is aouthor of this essay?