Key Difference: Network topology refers to the arrangement of different devices on the network. Star, ring, mesh, tree and hybrid are main topologies in context to a computer network.

Topology in general is related with the study of spaces. It assists in differentiating between different types of geometry from each other. The term topology is widely used in context to network topologies related to the field of computers. It defines the arrangement of various components like links, nodes, peripherals, etc. in a network. It can be used for describing physical as well as logical type of arrangement of the nodes involved in the network. There are many different types of topologies like – 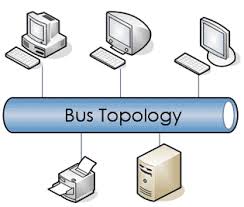 Bus Topology – It is defined by the use of a single main cable which has terminators on both ends. All the other nodes like workstations, peripherals, etc. are connected to this main cable. This type of topology is widely implemented in LANs as it is easy to install and does not cost much. It also does not require much cabling as in the case of some other topologies like star and mesh. The main disadvantage of this topology is that the entire network is dependent on the main cable. In case some problem occurs in the main cable, the whole system gets affected. 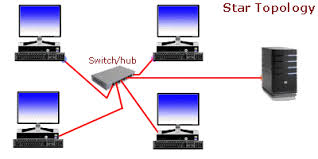 Star Topology – It is named as star topology as it looks similar to a star whereas all the elements of the network are primarily connected to a central device. This central device is known as hub and can be either of a hub, router or a switch. This central hub also works as a repeater for data flow. A point-to-point connection is laid between the devices and the central hub. Thus, all nodes are connected to each other only by the assistance of this central hub. Installation and wiring is easy of star topology. The functioning of the entire system depends on the central hub. 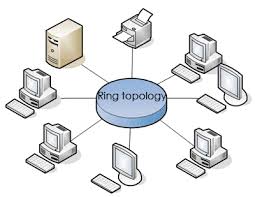 Ring Topology – It is in a shape similar to a ring, in which every node is connected to only two neighbors. The messages move in only one and the same direction in this arrangement. In case any cable or device breaks away from the loop, then it can be a fatal problem for the entire network. Token ring technology is used to implement this type of topology. It can be used for handling high volume of data. All devices are given the same importance in this topology. In case the capacity is increased beyond its comfortable limit then the network starts to compromise on speed. 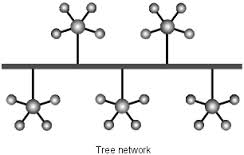 Tree Topology – It is also known as the hierarchical topology. It can be considered as the combination of linear bus and star topologies as it contains systems with star topology connected to a linear bus main cable. There is dependency on the main linear bus line, and therefore any fault in this line can bring the entire segment down. However, this type of arrangement is supported by many hardware and software tenders. This topology is also known as expanded star topology. The configuration and wiring is difficult in comparison to other topologies. However, its point to point wiring for individual sections is a desirable feature of this topology. 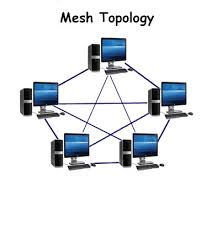 Mesh Topology – In this type of arrangement every node participating in the network is connected to every other node. However, this tends to be very expensive and difficult to implement. Multiple paths are can be used for transmitting a message. Due to the presence of dedicated links, it does not provide any traffic problem. The management of this arrangement is tricky due to heavy wiring. The system is configured in such a way that data takes the shortest path for reaching to its destination. Fault identification is also easy in this type of topology. 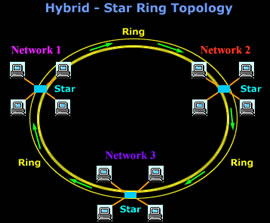 Hybrid Topology – It refers to the arrangement which is basically a combination of any two or more different types of network topologies. This arrangement is known for its flexibility and reliability. It tends to be little expensive. It depends upon the requirements of the organization, according to which the topologies are selected for creating a hybrid one. Star-bus and star-ring are two popular hybrid combinations. Corporate offices usually use this topology to link internal LANs while connecting external networks via WANs.