Difference between Affiliate and Subsidiary

Key Difference: An ‘affiliate’ is a type of inter-company relationship in which a company owns less than a majority of another company’s stock. A ‘subsidiary’, also known as a daughter company, is a company that is completely or partially owned by the parent company.

When it comes to business terminology, there are many words that can end up confusing a person; two of these words are an affiliate and a subsidiary. These words are commonly heard when talking about big corporations or in legal matters; however people are often confused as to what the differences between the two are and end up using them interchangeably. Though the words both mean a degree of control between two companies, they differ from each other in various ways.

An ‘affiliate’ is a type of inter-company relationship in which a company owns less than a majority of another company’s stock. During an affiliate, the parent company (the main company) has some sort of relationship with another smaller company, in which it may or may not own the company’s shares. It also refers to a relationship where two different companies are subsidiaries of a larger company.

A corporation may be referred to as an affiliate of another when it is related but not strictly controlled by the main company. Most common usage of affiliates arises when a company is trying to establish itself in an international market, without having to use its own name for legal purposes. Affiliate companies can also be used when companies need to avoid restrictive laws on foreign ownership. Affiliate companies are considered as a much safer investment, as the main company does not need to stake a lot of money or its reputation on the line and incase of bankruptcy the main company will not largely affected. In many countries, the government does not allow foreign companies to operate without having a local subsidiary or a tie-up, in which case affiliates play a big part in operations.

Another segment which is gaining popularity is known as affiliate marketing, which is a type of performance-based marketing in which a business pays one or more of its affiliates for bring in customers through its marketing techniques. In this type of marketing, the companies tie up only in an attempt to bring in customers. Affiliated marketing most commonly overlaps with internet marketing methods such as organic search engine optimization (SEO), paid search engine marketing (PPC - Pay Per Click), e-mail marketing, and in some sense display advertising. 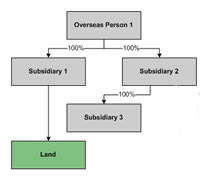 The subsidiary can be a company, corporation or a limited liability company. In many cases it can also be government owned or state owned enterprise. Subsidiaries have a distinct legal identity due to liabilities, taxation and regulations. Also it differs in the case of mergers or acquisitions, in which a board approval is required. In case of subsidiaries, board approval is not required to form a subsidiary.

Subsidiaries are popularly used when trying to penetrate a market, in which the parent company does not wish to use it own name. It is also profitable in case a company wants to enter into a new segment; however has little or no knowledge of the segment. Subsidiaries can also be used to the parent company to establish a presence in international markets. Subsidiaries are more costly to a company, compared to an affiliate, however it is gives a company more power in the voting rights and decision making of the company.