Difference between Aloe and Aloe Vera

Key Difference: Aloe is a genus of plants in the Plantae Kingdom that has over 400 species of flowering succulent plants. Aloe Vera is one of the most common species of the Aloe plant, which is believed to originate from northern Africa.

Aloe and Aloe Vera are most commonly heard in plants; Aloe Vera is a popular plant due to its medical uses. When people hear the word Aloe, they automatically assume Aloe Vera, and while Aloe Vera is a type of Aloe plant, they have distinct differences. 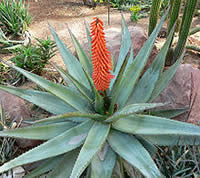 Aloe is a genus of plants in the Plantae Kingdom that has over 400 species of flowering succulent plants. This genus of plants is native to Africa, most common in the Cape Province, the mountains of tropical Africa, the islands of Africa including Madagascar, and the Arabian Peninsula. Most Aloe species have a rosette shape and large, thick, fleshy leaves. The leaves are lance shaped and are serrated. The flowers of the Aloe plant are tubular, frequently yellow, orange, pink or red, and are borne, densely clustered and pendant, at the apex of simple or branched, leafless stems. Aloe plants have short stems and grow directly at ground level. The color of Aloe plants range from bright green to gray green.

Some species of aloe such as aloe vera, aloe perryi, and aloe ferox have found uses in medicine since Ancient Greece. It is known to have medicinal properties that can help cure burns, cuts, scrapes, wounds, itchy skin, insect bites, and skin infections. Aloe has salicylic acid, which is known to act as a soothing agent for the skin. The yellow aloin, a resin from the aloe leaves, are known to act as a laxative, but has been banned for use by the US Food and Drug Administration.

Aloe Vera is one of the most common species of the Aloe plant, which is believed to originate from northern Africa. Aloe Vera shares the characteristics of the Aloe plant such as the rosette shape, large, thick serrated leaves and is bright green in color. Aloe Vera has been most commonly associated with its medicinal properties that have been used since the beginning of time. In modern times, Aloe Vera extracts have been used in cosmetics and medicine, being marketed as having rejuvenating, healing or soothing properties. The studies to suggest this are very limited and the properties of Aloe Vera extracts are still under investigation.

Aloe Vera is a very short-stemmed succulent plant that grows to 60–100 cm in length, spreading by offsets. The plant has thick and fleshy leaves that range from green to grey-green in color, with some varieties showing white flecks on the upper and lower stem surfaces. Aloe Vera produced flowers in the summer on a spike up to 90 cm tall. In addition to its medicinal properties, Aloe Vera is also grown as an ornamental plant. The popularity of having aloe plants are that they are able to survive in areas of low natural rainfall. Aloe Vera is most commonly used in folk medicine or for dietary supplement, phytochemicals, commodities, wound and lesion treatment, skin protection and cancer, diabetes and blood lipids. The seeds of aloe vera are considered for use as bio fuel.