Key Difference: Apple Watch is the long awaited smartwatch introduced by Apple, while LG G Watch R is a smartwatch by LG, powered by Android Wear. 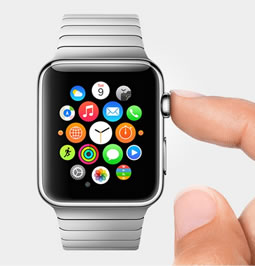 The constant boost in technology has resulted in keep the world constantly connected. Users can now remain even more connected with just a turn of the wrist. Apple Watch is the long awaited smartwatch introduced by Apple, while LG G Watch is a smartwatch by LG, powered by Android Wear.

What was thought to be named as iWatch, is released by the company under the name of Apple Watch. The watch is square in shape with round edges and comes in two sizes: 1.5 and 1.65 inches. The screen shows a number of built in applications by the company. However, it also performs the main function of the watch. The watches work only with iPhones, so if a person who owns an Android, will have to choose an iPhone if they wish to purchase the Apple Watch. For the iPhone users, the Apple Watch is compatible with iPhones 5 and above. The watch comes with some built-in storage for apps, photos and music, but no news to how much storage is actually on-board.

The watch has fitness sensors that can measure heart rate, an accelerometer, location information, etc. Additionally, the watch can also talk to the iPhone in order to get other information. The phone comes with two Apple apps that are determined to track goals for exercise: Activity and Workout. Activity shows your progress toward daily goals for moving, exercising, and even standing. Workout is for more detailed tracking of a variety of activities, including distance, pace, time, and calories burned during each session. It also incorporates a feature that will let the user to he/she has been sitting for a while and they should stand up.

In order to interact with the phone, Apple has provided three tools: touchscreen, digital crown and voice assistance. Another button visible just below the digital crown, brings up the Friends list. Using that list, the user can send messages or simply call their friends. 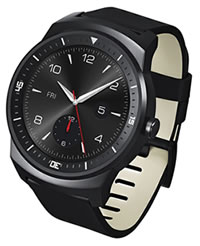 LG G Watch R is a smartwatch unveiled by LG and is already available on the market. It offers a 360 round screen, with 245ppi resolution, albeit not the best but proves more than sufficient for using as a smart watch. The watch comes with leather band, which is removable. It comes with standard size bands, so normal bands purchased from outside can also be used.

The LG G Watch R comes with superb battery that can last up to a day and a day and a half if used conservatively. The bezel has proper number marked on the sides to make it seem like a proper watch, but it seems out of place if the screen has a digital watch on it. The watch also has an automatic brightness mode, powered by an ambient light sensor. The ambient sensor can also be turned off, which will result the screen to turn black until the watch senses movement or the user looking at it.

The watch offers multiple downloadable applications via Google Play as well different watch faces. However, the faces cannot be customized. The watch is smooth and has little to no jerkiness when dismissing notifications or scrolling through the applications. The phone also comes with an option that allows the user to send the notification to the phone, allowing them to open it on the phone. Voice assistance is also provided, but it mostly only understands simple names and tasks. The watch comes with a heart rate monitor and some built in fitness applications.