Difference between Cheese and Butter

Key Difference: Butter and cheese are both dairy products. Cheese is made by fermenting or coagulating milk. Cheese is primarily made by curd or the semisolid substance formed after the process of milk coagulation. Butter is made by churning cream separated from milk. The cream used for the preparation of butter contains between 35 to 42 percent fat. Cheese is healthier than butter as butter is almost all fats, with a little amount of proteins. On the other hand, cheese contains milk proteins. 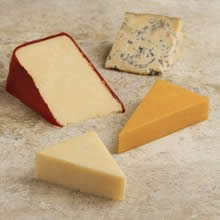 Butter and cheese both are popular dairy products. Cheese is basically a combination of the protein and fat of the milk which solidify.  The process of cheese making is quiet old, and can be considered that even 4000 years ago cheese was being made. There are different types of cheese and the process of cheese making may differ from one to another. However, all the processes involve the four steps in some or the other variance. These steps are curdling, draining, pressing and ripening.

First, the milk is curdled to separate the curd component from the liquid one. This may require a lactic starter, rennet or both. After curdling, draining removes the liquid content form the curd. Pressing makes use of forms or mold in which the curds are pressed. These molds expel moisture, and as the result, the cheese becomes drier and firmer.

Ripening or maturation stage is all about setting the right moisture, temperature and oxygen to effect microbes present in the cheese. These microbes work to create a unique texture, aroma and other attributes of the cheese. 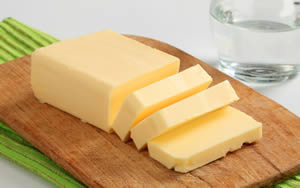 Butter is another dairy product which is made by churning milk. Firstly, cream is separated from fresh whole milk. Then, milk is churned until the fats set apart from the liquid and the butter gets a semi liquid state. Many believe that is was first discovered by Naomads and that too by mistake. It is considered to be the fat of the milk.

Commercially, butter is made by using similar process. First the fresh milk is collected and is brought to the creamery where the cream is separated from whole milk with the use of centrifugal force. Then, milk is heating for pasteurization. After pasteurization, the cream is put into a churning apparatus or cylinder where it is beaten vigorously. The process of churning takes place until it thickens and form butter. The remaining buttermilk is drained.

Although cheese and butter are both dairy products, they are made using different methods. Due to this difference, they greatly differ from each other in terms of taste. Cheese is comparativley very low in fats than butter. Butter is made from the cream of fresh milk, whereas cheese is made from curd.

Comparison between Cheese and Butter: