Difference between Diode and Capacitor

Key Difference: A diode is a type of electrical device that allows current to move through it in only one direction. It consists of an N-type semiconductor and a P-type semiconductor that are placed together. A capacitor consists of two conductors which are separated by a dielectric medium. It stores electrical charge and is capable of discharging it whenever required. A diode is a lossy passive electronic component, whereas a capacitor is a non-lossy passive electronic component. 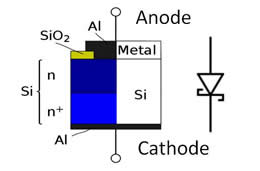 A diode is a type of electrical device that conducts the current only in one direction. The direction is defined from anode to cathode. In other words, it is the simplest of the two terminal unilateral semiconductor devices. It permits the current to flow in one direction and at the same time it also blocks the current that flows from the opposite direction. The two terminals of the diodes are known as anode and cathode. A diode can be closely related to a switch. Mainly there are two types of semiconductor diodes –

A capacitor is an electronic component that stores energy in the form of an electric field. It is constructed by using closely spaced conductors. In functioning, it acts quite similar to small rechargeable batteries. Therefore, it is able to store and release electrical energy.

Originally, capacitors were known as condensers. It is an electronic component that stores electrical charge and is capable of discharging it whenever required. Capacitance defines the capacity of a capacitor to store electrons. Capacitance is measured in Farads. A capacitor blocks Direct Current (DC) and allows Alternating Current (AC) to pass through it. Therefore, they are widely used to extract AC components from DC + AC components. A capacitor is generally constructed by using two metal plates or metal foils separated by an insulator called a dielectric material. This insulator prevents charges to move across the plates. Any non-conducting substance can be used as a dielectric material. In the existence of voltage, one end of the capacitor drains, whereas the other end fills with charge. The process is termed as charging. Due to this imbalance, a reverse voltage develops that stops the capacitor from being charged.

Capacitors are capable of storing electrical energy directly as an electrostatic field is created between two metal "plates".  Thus, a capacitor can be defined as an arrangement of two conducting surfaces separated by a dielectric medium. Capacitors can be checked with an ohmmeter for short or open circuits.

Comparison between Diode and Capacitor:

The answering was perfect guys.i loved it,helped me a lot. Thanks very much