Difference between DNA and Chromosome

Key Difference: DNA, short for Deoxyribonucleic acid, is a molecule that encodes the genetic instructions that is used for the development and functioning of cells in a living organism and many viruses. Chromosomes are basically organized structure of DNA and protein cells that are found in a cell. 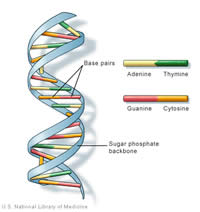 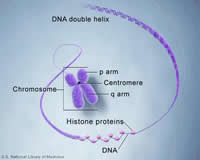 Chromosomes are basically organized structure of DNA and protein cells that are found in a cell. It is a single piece of coiled DNA that contains many genes, regulatory elements and other nucleotide sequences. It also contains DNA-bound proteins that allow it to control its functions. DNAs are made up of 100,000 to over 3,750,000,000 nucleotides which are either in linear form of circular form depending on the organism. This form is then packed with proteins and is formed into chromosomes. A human being has 23 chromosomes from each parent, making it 46 chromosomes per cell. Human chromosomes are approximately s6 µm long, a packing ratio of 8000:1.

Chromosomes play a huge part in genetic diversity and are duplicated and split during mitosis and meiosis. If the chromosomes are incorrectly duplicated they go through a process known as chromosomal instability and translocation, where the cell could die or lead to the progression of cancer. The word chromosome is derived from the Greek χρῶμα (chroma, colour) and σῶμα (soma, body), because of them being strongly stained by some dyes.