Difference between Douche and Douchebag

Key difference: The terms douche and douchebag essentially mean the same. Factually speaking, douche is the shortened form of douchebag.

It’s the age of rip-roaring slangs and shenanigans; and douche or douchebag features prominently among them. Basically, douche and douchebag are the same. Douche is nothing but the shortened form of douchebag. Douche or douchebag is an outright offensive term. It is pejorative in nature, and is used to show contempt at a person. 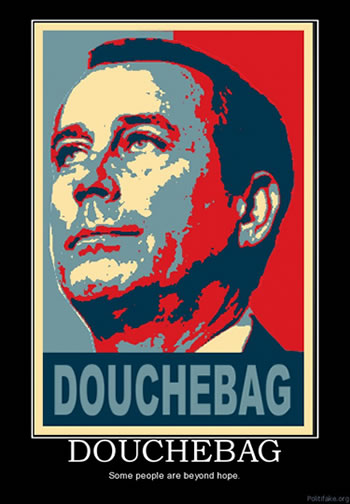 The term ‘douchebag’ generally denotes a male who thinks he’s got it all going for him, but sadly, he’s the only one who thinks so. All others in his unfortunate company find him pretty annoying and vaguely amusing at the least. If one were to describe the personality of a douchebag by using the metaphor of a soup recipe, it would probably end up looking something like this:

To garnish – absolute ignorance to one’s own pathetic behavior

Preparation: First up, use gigantic ego as the broth. Let it simmer to the hilt. Add wholesome obnoxiousness, arrogance and rudeness to the broth. When the liquid starts bubbling, put in the freshly chopped first rate snob. Keep stirring intermittently with the addition of exquisitely made loser sauce. Once the soup achieves a distinctly abhorrent color, top it off with dollops of social ineptitude. Last but not the least, garnish the soup with the choicest and an absolute ignorance to one’s own pathetic behavior for an extraordinary presentation!

Apart from his distinctly obvious characteristics and behavioral traits, a douchebag will also provide instant giveaways that can help you mark one out. Bearing his inflated sense of self-worth in mind, a douchebag will always harp about his own achievements, even if they’re as infinitesimal as an ant’s leg. He would always try to befriend the influential and the wealthy people in a party, so as to gain favors from them in the future. He would also make no attempts to shy away from any sort of social limelight, even if it lasts for a nanosecond.

A personal favorite of many people, a douchebag would never even think twice about being desirable in the eyes of women. On the contrary, a douchebag will proclaim himself as ‘the ladies man’. However, this statement could be proved to be partly true, as all the ladies in a party would actually revel in the over-the-top and free-of-charge histrionics show provided by a douchebag. This is fine as long as he’s actually serious and not trying to be funny, because the moment he tries something funny it would probably be a cue for the ladies to move out the back door.

Another quintessential trait of a top-notch douchebag is that he would go to any lengths to malign or severely sabotage the image of a person who doesn’t want to put up with him anymore. The same, if not a more lethal treatment would be meted out by a douchebag to a person who is or puts up a front against him by finding little chinks in his façade. In effect, an encounter with a douchebag would leave one so exhausted from within, that he/she might start to doubt the inherent sense of sanity.

Hence, in conclusion, it is advisable to stay miles away from a douchebag. However, if you do end up in company of one, be sure that you’re in for a grand show!

Comparison between Douche and Douchebag: