Difference between Emigrate and Immigrate

Key Difference: Emigrate means exiting from a particular country or place, while immigrate means entering into another country with the intention of living and working there permanently. 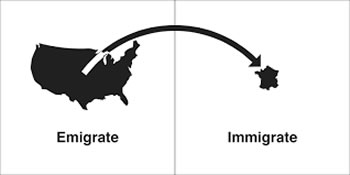 The words ‘emigrate’ and ‘immigrate’ are often confusing for a lot of people because they sound so similar. And while they are related to each other, they have very different meanings from each other. Let’s take a closer look at both the words.

The words both fall under the umbrella term ‘migrate’ which is generally defined as “to move”. The word migrate refers to a living thing moving to a certain place for either a short period of time or permanently. It can be used for human beings moving as well as other living things such as birds and animals. Also, migration doesn’t have to be to different countries, but it can also be within the same country.

Now, keeping this in mind let’s take a look at immigrate. The word ‘immigrate’ is derived from the Latin word ‘immigratus’, which means “to remove, go into, move in”. This word is used to define going into another country permanently. The word describes a human’s intention of choosing to live and work in another country permanently. Immigration is used for moving across country boundaries.

Example of Immigration: World War II resulted in a lot of people immigrating to the United States.

On the other hand, the word ‘emigrate’ can be considered as the opposite, but you can simply consider it as a complimentary word. The word ‘emigrate’ is derived from the Latin word ‘emigratus’ meaning “move away, depart from a place.” It defines the wish of a person to quit one place and move to another. This decision to leave the current place is referred to as emigrating. However, it doesn’t have to refer to shifting countries but instead one can emigrate within the same country. 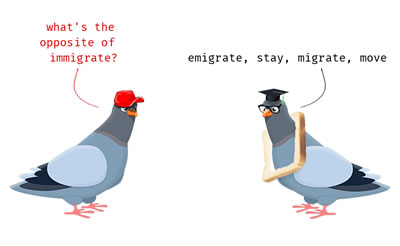 Example of Emigrate: The unsteady Greece economy pushed a lot of people to emigrate from Greece.

Comparison between Emigrate and Immigrate: