Difference between Epistemology and Ontology 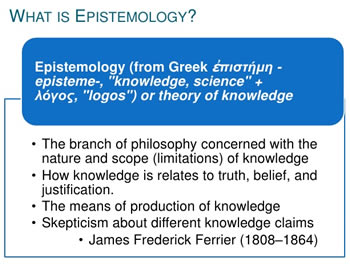 Epistemology and Ontology are two similar but completely different things. Both are philosophical in nature where they ask people to think beyond what they know. Hence, they are often confused, however, in actuality each is concerned with a different field of study.

Epistemology is a sub field or a branch of philosophy. The term is derived from the Ancient Greek word ‘epistēmē’, which means ‘knowledge’. It is then combined with - suffix -logy, meaning ‘a logical discourse’ or ‘study of’. Hence, it can be inferred that epistemology deals primarily with the theory of knowledge.

The purpose of Epistemology is to try to figure out what constitutes as knowledge. Does just knowing something constitute as knowledge? Does one have to study it or thoroughly understand it to constitute knowledge? There is no correct or wrong answer to these questions. For every example that proves these assumptions to be correct, there are a ton more that disprove it. So, it begs to ask the question, what is exactly knowledge? Sadly, there is not correct answer to that question either, which is why it is philosophy.

Ontology, on the other hand, is actually a subset of metaphysics, which is in turn a branch of philosophy. Metaphysics seeks primarily to answer the question, what is reality? Its areas of investigation primarily include existence, objects and their properties, space and time, cause and effect, and possibility. 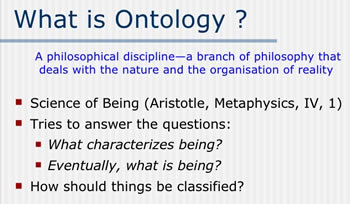 Ontology deals specifically with the philosophical study of the nature of being, becoming, existence or reality. Basically, it deals with how things come into being and what kinds of things exist. In fact, the term ontology comes from the Greek ‘onto-’ meaning “being” or “that which is” with the suffix -logy, meaning ‘a logical discourse.’ Hence, ontology is literally the study of being.

In order to differentiate between them further, it can be said that ontology deals with what is true, whereas epistemology deals with figuring out that truth. It can also be said that ontology is about the nature of reality and epistemology is about the relationship between the person and that reality, i.e. how people gain knowledge or how they get to know something, as well as the different methods of gaining knowledge.

Comparison between Epistemology and Ontology: