Key difference: The unique aspect of Lenovo IdeaPad Yoga 11 is that it is a convertible laptop with multi-mode 360 deg Flip design. This allows the device to take up four design modes. This includes Laptop Mode, Tablet Mode, Tent Mode and finally, Stand Mode. The Lenovo IdeaPad Yoga 11 features an 11.6 inch high-definition display and weighs 1.27kg (2.8 lbs). It is powered by NVIDIA Tegra 3 processor and a 2GB DDR3L RAM. The Asus Padfone Infinity smartphone is a slick 5-inch full HD 1920x1080, Super IPS+ with Capacitive Multi touch panel and provides approximately 441 ppi density. The device is a bar phone, with curved corners giving it a similar look to the ‘iPhone’ and ‘HTC One’. The Asus Padfone Infinity Dock is basically the 10-inch tablet shell that allows users to dock their phone into the tablet by sliding it into a slick slot on the back. 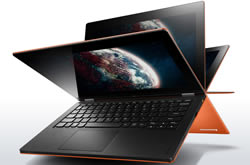