Difference between Male and Female Circumcision 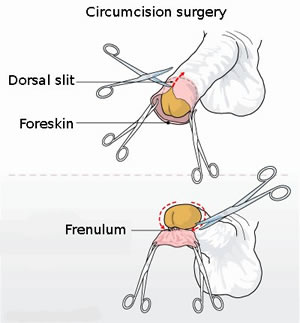 Male Circumcision has been divided into four types:

Type III – Removal of all skin (including scrotum)

Type IV - Sub incision (Any cuts, pricks and incisions made to the penis) 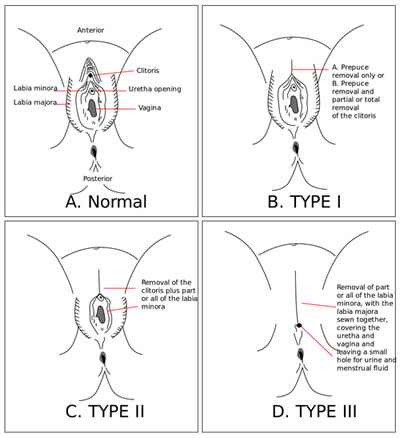 Female Circumcision is the process of removing part or complete external female genitalia. It is also known as Female Genital Mutilation, or FGM. The procedure includes using blades or razors with little to no anesthesia. The process differs depending on the area. In some areas, circumcision removes only a part of the clitoris or the full clitoris. While, in other areas a severe form of circumcision is performed – known as infibulation. Infibulation requires the removal of the clitoris, the clitoral hood, clitoral glands, the inner and the outer labia, and the closure of the labia. The rest is stitched up again with only a small hole left open for urination and menstrual cycle.

Type II – Partial or total removal of the clitoris and the labia minora, with or without excision of the labia majora

Type III – Narrowing of the vaginal orifice with creation of a covering seal by cutting and appositioning the labia minora and/or the labia majora, with or without excision of the clitoris

Type IV – All other harmful procedures to the female genitalia for non-medical purposes, for example: pricking, piercing, incising, scraping and cauterization.

Comparison between Male and Female Circumcision:

"Female Circumcision" involves the removal or reduction of the hood of the clitoris for aesthetic or medical purposes. On the flip side, Female Genital mutilation (FGM) is a way of mutilating the genital parts of the girl or woman for curbing her sexual behavior by the cutting or stitching of the genital parts of the woman often removing the clitoris. They both should not be confused with each other. "Female circumcision" is perfectly legal and is commonly referred to as "clitoral hood reduction" or "clitoral hoodectomy" which is a expensive plastic surgery procedure (costing $2500 to $15,000 usd) that women pay for to enhance sexual function/aesthetics. This procedure also has the same health benefits as the male counterpart (disease prevention, hygienic, etc) and is 100% voluntary if you have the funds..simply google it (or bing/yahoo if that's your thing) it is easy knowledge to find..but easily miss understood (especially with pages like this). FGM is involuntary castration linking to cultural/tribal practices which should be eradicated just as the male counterpart to this was ended in 1912 search the term "eunuch" a man who genital where mutilated or even removed leaving only functions for urination, this practice was done in Europe/Asia and africa for men raised in certain cast systems (think catholic boys raised to be singers, or servants to the emperor in china/korea). So although this page is informative..it is vastly wrong in its use of words to describe female circumcision. All circumcision should be the decision of the individual, However men do not have that option in many cases (not all cases) as it is decided for them at birth, women on the other hand have that option later in life. FGM or this misinformed version of "female circumcision" should be called what it is CASTRATION. Hell if male circumcision is viewed as ok for babies because it make penises look cool and gain a health benefit why can't the real female circumcision aka clitoral hoodectomy be ok for babies as it's vastly unfair that women have to pay 1000's dollars later on in life to fix a insecurity/gain health benefit. A real argument about circumcision should be that men get circumcision (penile sculpting) and it is seen as the norm, and a woman goes to get circumcision via "clitoral hoodectomy" (vaginal sculpting) and it has to be discreet because it is seen as "taboo" and should be happy with what you have even though there is a option for aesthetic/health benefit the same as men. People need to stop linking female circumcision with female castration (the real FGM) Dammit. OK rant over. :)

The information about male circumcision is incorrect. It does change a mans ability to orgasm. It does hurt very badly. And it does have a lot of risks. Also, it is frowned upon in many nations and Germany is trying to make it illegal.

honestly, the majority of people are misinformed. I was circumcised precisely in Germany and it was probably one of the best countries I could have done it. it would be a shame if it became illegal. the tip of the foreskin is bad because it prevents the skin from rolling back during erections and the skin can even rip. in addition, it leads to accumulation of a yellow paste, which are bacteria and it smells bad. my circumcision was only the tip, which allows me to clean my genitals properly and also I have no problems with erections. having a full circumcision would be bad because the foreskin protects the head and removing it would make the head less sensitive. this would make having orgasms more difficult. I was circumcised when I was 8 years old and it took almost a month to heal. it was very painful during the first few days whenever I had to pee, but then I learned how to avoid contact with the urine. it was also starting to get an infection but I was able to treat it before it became bad. other than that it was painful whenever something came in contact with my penis (including pants and underwear) so the doctor taught me a weird position to place my penis to avoid contact with the place were it hurt. as for the female circumcision, I stumbled across this page because I got curious about it. I thought maybe women would also have a circumcision to remove the skin above the clitoris since it also causes bacteria accumulation and maybe they had other reasons as well. but looking at how misinformed the author is and the fact that he/she says circumcision and mutilation are the same, I guess it's just one of those feminist victim pages.