Difference between Mexico and New Mexico 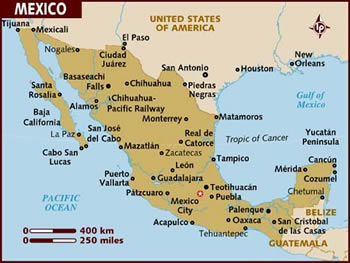 While, the names are familiar, the difference between the two is significant. Mexico is a country in North America, whereas New Mexico is a state in the United States of America.

Mexico is officially known as the United Mexican States, or Estados Unidos Mexicanos in Spanish. It is a federal republic that is located in North America, just south of United States of America. In the south or west of Mexico is the Pacific Ocean, while located on the southeast is Guatemala, Belize, and the Caribbean Sea, and at the east is the Gulf of Mexico. Mexico is a federation comprising thirty-one states and a Federal District. The Federal District is the capital known as Mexico City.

Before the Spaniards arrived in Mexico, it contained advanced civilizations such as the Olmec, the Toltec, the Teotihuacan, the Zapotec, the Maya and the Aztec. After their decline and the growth of Spanish colonization, it became the Viceroyalty of New Spain. After the decline of colonization, the Mexico declares its independence in 1821.

The post-independence period was characterized by economic instability, the Mexican-American War that led to the territorial cession to the United States, the Pastry War, the Franco-Mexican War, a civil war, two empires and a domestic dictatorship. However, today, Mexico one of the world's largest economies. It is also the tenth largest oil producer in the world, and the largest silver producer in the world. It is considered both a regional power and middle power.

Mexico was the first Latin American member of the Organisation for Economic Co-operation and Development OECD. It is also considered by the World Bank to be an upper-middle income country. It has the fourteenth largest nominal GDP and the tenth largest GDP by purchasing power parity, which is why it is considered a newly industrialized country and an emerging power. 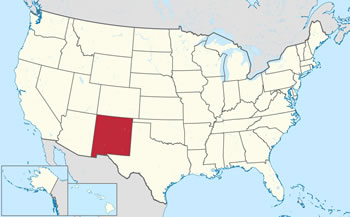 After Mexico declared independence from Spain, the region which would eventually go on to become the states of Texas, New Mexico, and parts of Arizona and California, was originally part of Mexico. Texas eventually ceded from Mexico and opted to join the United States of America.

After the Mexican-American War, from 1846–1848 and the Treaty of Guadalupe Hidalgo in 1848, Mexico eventually ceded a large area to the United States of America. This area became known as the American Southwest and California. It eventually became of states of Arizona and New Mexico, as well as parts of Colorado and Nevada. In 1853, the Gadsden Purchase acquires the southwestern boot heel of New Mexico and southern Arizona. New Mexico became an official state of United States in on January 6, 1912. It was the 47th state, prior to which it was just a territory.

While, many believe that the state derived its name of its parent country, Mexico. However, the region was dubbed New Mexico by explorers because they believed that area contained wealthy Indian cultures similar to those of the Mexica (Aztec) Empire. In fact, New Mexico, or Nuevo México in Spanish was given its name in the year 1563, and again in 1581, much before Mexico, who adopted its name in 1821.

Today, New Mexico is home to three Air Force bases, White Sands Missile Range, and the federal research laboratories Los Alamos National Laboratory and Sandia National Laboratories. It is predominant producer of oil and gas. It is in fact the third leading crude oil and natural gas producer in the United States.

Comparison between Mexico and New Mexico: