Key difference: Mustard and Canola plants are known vegetables whose mustard and rapeseeds are used to extract their respective oils. In botanical terms, both these plants belongs to the brassica family, viz. mustard seeds come form brassica juncea, while rapeseeds (canola) are from brassica rapus.

Oils are considered to be the most essential part in the dietary and fitness oriented food. These are key components of various healthy and tasty recipes, which add a flavor of moisture and spice in the food. Oils are used in bulk quantities for frying or grilling cooking applications. Along with cooking oils also contribute a major share in the medical health aspects, and hence, all oils have their own importance and benefits when it comes to health and body fitness maintenance.

Among them are the known mustard and canola oils. Often people get confused among both the oils, the rapeseed plant is commonly called as the field mustard, due to which the oils are considered to be one and the same, but they are not so, as these contribute totally different share in their usages. As in cooking these oils can be used as substitutes, to other vegetable oils, i.e. mustard oil can be used as a type of dressing for salads and vegetables; while canola oil can be used for salad dressings and marinades; and as a method to keep foods from sticking to pans. Also, the seeds of both mustard and canola plants are used as flavoring spices and to make condiments. 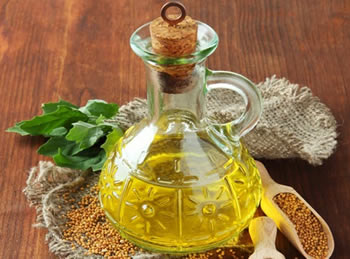 Mustard oil is typical in its pungent odor and dark color when available in crude form. If the smell is kept aside, then the oil is potentially considered to be the healthiest among the other oils. The mustard oil is available in refined or filtered varieties, but to avoid the adulteration and its effects on the oil, only the refined oil is used in cooking applications. Apart from cooking the oil also has been in use, in the Ayurvedic sectors, as the oil is known for its healing and medicinal properties and is also considered to be beneficial for hair, skin and body. The oil is the third largest oil among the other cooking oils. As of the health benefits, the oil is regarded to be too beneficial in health aspects. 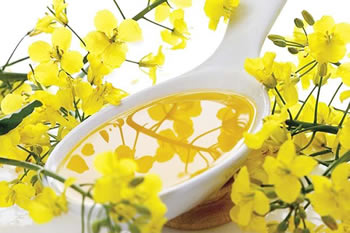 Canola oil is obtained from rapeseeds often called as canola seeds. The oil extraction involves a long precipitation and organic acid treatment process. The oil is low in saturated fats; but has a desirable high amount of monounsaturated fats. Along with cooking, the oil is also used in industrial purposes like industrial lubricants, bio-fuels, candles, lipsticks, and newspaper inks depending on the price on the spot market. The American Society for Reproductive Medicine recommended that the canola oil is regarded to be the fertility-preserving vaginal lubricant. Recently, the studies have also been conducted to utilize the oil for reducing the growth of cancer cells.

Mustard and Canola oil are used around the world, as they can be used as substitutes for cooking in order to provide an alternative form of dietary fat and flavor. The saturated and unsaturated fats in appropriate quantity are essential for the body to function properly. Earlier, the mustard oil was considered to be allergic and toxic, due to its erucic acid contents, which results a negative impact on human body. Hence, the oil was prohibited in some countries. But today after the successful research and work; the oil is free from toxic nature and hence is fit to consume. Also, the alpha-linoleic acid which is present in mustard oils is a type of fatty acid which may help to lower cholesterol levels. Whereas Canola oil is also free from the food allergens and also the oil can be stored for a longer duration of time as it do not undergo rancid. In terms of health aspects, canola oil proves to be much beneficial than mustard oils.

Want to know the chemical composition difference too