Difference between Puppet and Muppet

Key Difference: Puppet is a movable inanimate object or figures which resembles a person or an animal. Puppets are used in puppetry and are controlled by a puppeteer. Muppets are also types of puppets. However, they are specifically associated with the puppet characters created by Jim Henson in 1955. 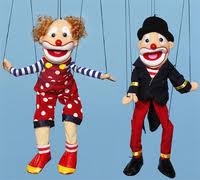 Puppet is a movable inanimate object or figures which resembles a person or an animal. Puppets are controlled by a puppeteer. They have a long history and have been a part of various cultures. One can also relate their origin with 2400 BC, as at that time, a toy cattle was found whose head could be moved by strings. It was found in Harrappan, which is now in Modern Pakistan.

They have been used in ceremonies, rituals, etc. Earlier there were made of clay and had moving limbs. These limbs were lifted by using a string. Puppets vary in sizes. They can be as the same as a tiny figure or even larger than an average human. In France, Marionettes (string puppets) gained a lot of popularity. Puppets are of various types like – hand or glove puppet, string puppet, rod puppet, finger puppet, etc.

Muppets are also types of puppets. However, they are specifically associated with the puppet characters created by Jim Henson in 1955. Jim Henson was a talented American puppeteer. He put life on various characters like Kermit and Miss Peggy as puppets. These puppets were developed for television. They have a wide mouth and the puppeteers thumb forms the jaws. The fingers form the upper part of the face of the Muppets. These Muppets are known for their sly-witted style.

These Muppets started with the Muppet show but soon expanded in movies, specials, books, etc. The Walt Disney Company acquired the Muppets franchise in February 2004, and formed the Muppets Studio, LLC. It is very difficult to differentiate between puppets and muppets as muppets are types of puppets, and thus have all the features of a basic puppet. However, they specifically define the puppets that were created by Jim Henson. Puppets are of various types, and thus have numerous types of features. Muppets are copyrighted characters of Disney. They are known for their wide mouth and big eyes.

Comparison between Puppet and Muppet: