Difference between Redneck and Hick

Key difference: Redneck is a disparaging term for a member of the white rural laboring class, especially in the Southern United States. A hick is also an offensive slang term for an uneducated and unintelligent person. 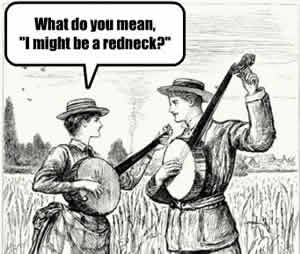 Redneck is an offensive slang term for the poor white farmers. They are not so wealthy, possibly uneducated, and are simple villagers in the southern United States. The term originated because the farmers have a red neck caused by sunburn from hours working in the field. After sometime, near 1910, the term came to refer to people who go against the usual flow of things and events. It can also refer to a person with a conservative view but can be racialist. Apart from all the criticisms and the general negative opinion regarding them, they are one way or another, hard working and simple people.

A hick is also a disparaging slang term for an uneducated person. Oxford dictionaries define the word hick as “a person who lives in the country, regarded as being unintelligent or parochial.” It is the word for a person who has always resided in the country, and does not know about life in the cities. They are awkwardly simple in nature and provincial. Hick is used in the context, example: bumpkin country boys, rustic farmer, a hick town, etc. The term is also infered in the quotation like 'the nightlife of Montmartre awed the unsophisticated tourists'.

Comparison between Redneck and Hick: