Difference between Richter Scale and Seismograph

Key Difference: A seismograph is any instrument that measures motions of the ground, including those of seismic waves generated by earthquakes, volcanic eruptions, and other seismic sources. While, the Richter scale is a scale, ranging from 1 to 10, for indicating the intensity of an earthquake. 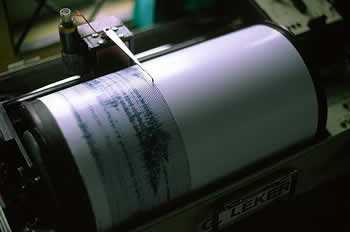 According to the U.S. Geological Survey, there are as many as 1.3 million earthquakes in a year that humans can feel. This is without taking into consideration all the other small quakes that happen everyday, which humans don’t even realize. Of these million earthquakes, the majority take place in remote areas far from people and are often so low in intensity that most people would not notice.

While there are many reasons for the earthquakes, ranging from meteor impacts and volcanic eruptions, to man-made events like mine collapses and underground nuclear tests, the most common reasons for earthquakes are the shifting of the Earth’s tectonic plates. However, rather than what causes the earthquakes, more importance is on how strong the earthquake is, how much damage can it cause, and how to best plan for it.

In order to figure out when the next earthquake could be, there is a device known as the Seismograph. The seismograph or seismometer is an instrument that measures the motions of the ground, including those of seismic waves generated by earthquakes, volcanic eruptions, and other seismic sources. The records of the seismic waves helps seismologists to map the interior of the Earth, and to locate and measure the different sources of earthquakes.

The first seismograph was designed by Zhang Heng of China's Han dynasty in the year 132 AD. It was called “Houfeng Didong Yi”, which literally means an "instrument for measuring the seasonal winds and the movements of the Earth" While, the device worked on the presumption that earthquakes were caused the direction, force, and timing of the winds, it still could predict the direction of an earthquake that occurred up to 500 km (310 mi) away.

The plans of the original Zhang Heng’s seismometer were lost over time. However, historians and scientists have been able to recover enough information to be able to create a working model. Nonetheless, after 1880, most seismometers were descended from those developed by the team of John Milne, James Alfred Ewing and Thomas Gray, who worked in Japan from 1880 to 1895. After World War II, these were adapted into the widely used Press-Ewing seismometer.

A seismometer has a weight hanging on a spring. Hence, it is sensitive to up-down motions of the earth. The spring and weight are suspended from a frame that moves along with the earthʼs surface. As the earth moves, the relative motion between the weight and the earth can be recorded to create the history of the earth’s motion. Changes in motion can be used to indicate the chances and intensity of an earthquake. 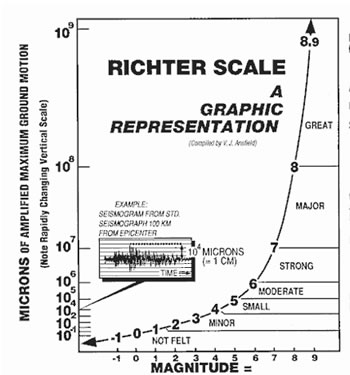 Comparison between Richter Scale and Seismograph: