Difference Between Rugby and Soccer

Key Difference: Soccer (Football) is played between 11 players on a field and includes a spherical ball. Rugby includes 13-15 players and an elongated ball. Rugby football consists of two halves of 40 minutes each, while soccer consists of two halves of 45 minutes each and both the games do not include any time outs. In Soccer, a player may not touch the ball when the game is in play, with the exception of the goalie. In Rugby a player is required to touch and carry the ball.

Soccer also known as Football is one of the most popular sport in the world. Rugby is said to share many of soccer’s characteristics, however it is distinctly different in many ways. Both sports vary on many levels.

Soccer (Football) is played between 11 players on a field and includes a spherical ball. The game consists of two halves of 45 minutes each, and does not include timeouts. The referee is the enforcer and the time keeper of the match and it is his responsibility to oversee that the match is played fair. Soccer has 17 Laws that govern the sport. The game is played only using feet, legs, head and torso. No player, with the exception of the goal keeper, may touch the ball with their hands during game play. The goal keeper’s job is to protect the goal net. The main objective of the game is score points by driving the ball in the opposing team’s net. The team with the most scores at the end of the game wins.

The game play starts with a coin-toss, to determine which team will play offence and the other defense. If the ball goes out of play, the field players are required to restart the game by throwing-in the ball. If the game is a draw, extra-time or penalty shoot out depending on the format of the competition will determine the final score. Other than kicking or blocking the ball, no other contact is allowed. 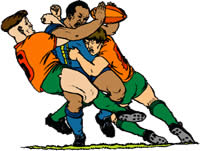 Rugby football consists of two halves of 40 minutes each and does not include any time outs. The referee may however, keep time and stop time during substitutions or injuries. A rugby team in union is allowed to have 15 players on the field at the time of play. The match begins with the kickoff and the teams fight for the possession of the ball. The team that receives the ball can run with it, kick it or pass it backwards. The opponent can tackle the ball carrier anytime during the game. The objective of the game is to earn points by touching the ball the opposing team’s goal line or kicking it through the opposing team’s goal post.

In Rugby (Union) a try is worth 5 points and the players are divided into forwards and backs. Forwards are usually larger and stronger people whose jobs is to possess the ball, while the backs are generally smaller and faster and their jobs is to exploit ball positions. The players can play in offence and defense according to the requirement of the game. The ball has to be passed either sideways or backwards, while kicking is allowed in any direction. Other than tackles, scrummages, rucks, mauls, and lineouts, no other contact is allowed.

In Soccer, a player may not touch the ball when the game is in play, with the exception of the goalie. In Rugby a player is required to touch and carry the ball.  The ball differs in both games as well. In Rugby, the ball is prolate spheroid shaped, while in soccer the ball is spherical. Soccer allows 11 players on a field, while Rugby allows 15. Scoring is different as well in both games, while Rugby allows players to score points using different methods, soccer only awards points when a goal is made.