Key difference: Samsung Galaxy S Duos is a dual-SIM phone that was launched in September 2012. The phone comes with a 4-inch TFT capacitive touchscreen, with approximately 233 ppi density. The device comes with Samsung’s TouchWiz UI on Android 4.0.4 ICS. The Galaxy S3 is a slate-format multi-touch smartphone that was launched in May 2012. It is the successor of Galaxy S2 and Galaxy S but abandons the rectangular design of the predecessors and opts for more rounded corners making it resemble the Galaxy Nexus. The S3 sports a 4.8 HD Super AMOLED screen with corning gorilla glass 2. 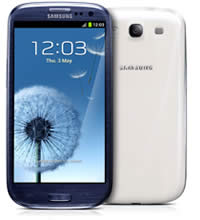 The Galaxy S3 is a slate-format multi-touch smartphone that was launched in May 2012. It is the successor of Galaxy S2 and Galaxy S but abandons the rectangular design of the predecessors and opts for more rounded corners making it resemble the Galaxy Nexus. The S3 sports a 4.8 HD Super AMOLED screen with corning gorilla glass 2. It is offered with Android v4.0.4 (Ice Cream Sandwich) and can be upgraded to 4.1.2 (Jelly Bean). The Galaxy S III has a polycarbonate plastic chassis and is available in a variety of different colors. The S3 supports a 1.4 GHz Cortex-A9 Quad-core processor, Mali-400MP GPU and 1 GB RAM. The S3 is available with 16 or 32 GB internal storage capacity, which can be expanded up to an additional 64 GB.

The phone boasts an 8 megapixel Auto Focus camera with flash, zero shutter lag and BSI. It also supports a 1.9 megapixel secondary camera that is capable of recording HD videos @30fps. When the phone was initially launched in May, the phone was considered to have been backed with innovative features and the TouchWiz "Nature UX" GUI was considered to be advanced. The GUI also included the “Water Lux” effect which can produce water ripples on contact. The phone also offered S Voice in response to Apple’s Siri, which enabled users to verbally control 20 functions on the phone. It was effectively considered as a iPhone killer. It also received additional publicity because of the ongoing patent infringement lawsuits against Apple.