Difference between Santa Claus and Sinterklaas 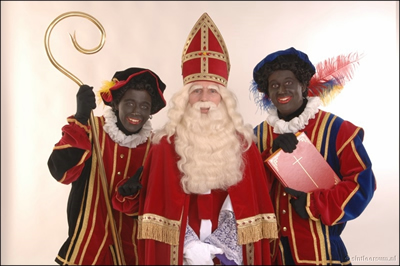 Santa Claus and Sinterklaas can both be dated back to the 4th century and to Saint Nikolas. Nikolas of Myra was born on 15 March 270 as an only child to wealthy parents. At a very young age he lost his parents and was raised by his uncle. In his youth, he became a priest and dedicated his life to helping the poor. He gave away all of his wealth to the people who needed it, because of which he was declared as a Saint. His stories are often what are considered as the origins of Santa Claus. One popular legend has Saint Nikolas giving money to a father who had three daughters and no way to pay for their dowry. In order to save them from their fate, he drops bags of gold the night before the daughter comes of age in order to pay for the dowry. In this version, the Saint throws the bags of gold from the chimney but the daughter had put a stocking to dry near the chimney and the bag of gold fell into the stocking (where the legend of the stockings by the chimney is believed to come from).

Following the death of Saint Nikolas, many people in the European countries such as the Netherlands, Belgium, Northern France, Aruba, Bonaire, Curaça celebrated giving gifts in order to honor the tradition of Saint Nikolas on the day of his death 6 December. This some how evolved into the current tradition that are followed in those countries, where a guy in a clergyman outfit comes bearing gifts for all the good children. This guy is now known as the Sinterklaas.

The name if often derived from the Dutch corruption of the name, Saint Nickolas, with Sinter meaning ‘Saint’ and Klass a nickname for Nikolas in Dutch. Other variations based on Saint Nikolas are popular among countries such as, some parts of Germany and Austria (Sankt Nikolaus); Switzerland (Samichlaus); Italy (San Nicola in Bari, South Tyrol, Alpine municipalities, and many others); parts of Bosnia and Herzegovina, Croatia and Serbia (Sveti Nikola); Slovenia (Sveti Nikolaj or Sveti Miklavž); and Greece (Agios Nikolaos), among others.

Saint Nikolas, originally popular among the Europeans, did not gain importance in the West until the 18th century, or rather 1773-74 to be exact. Saint Nikolas was first heard of when a New York based newspaper reported that Dutch families had gathered in order to honor and celebrate the anniversary of his death. The name Santa Claus is often considered as broken translation of the word Sinterklaas from the Dutch folklore. The appearance of the modern day Santa Claus is a mix of Sinterklaas, Odin (Norse God) and Father Christmas.

Many works of literature have given importance to Santa Claus, as well as modifying its image to what we imagine Santa to be today. These include Washington Irving's History of New York, A New-year's present, to the little ones from five to twelve, poem "A Visit From St. Nicholas" (also known as "The Night Before Christmas"). The poem added aspects such as riding in a sleigh that lands on the roof, entering through the chimney, and having a bag full of toys. The poem described St. Nick as being "chubby and plump, a right jolly old elf" with "a little round belly", that "shook when he laughed like a bowlful of jelly". 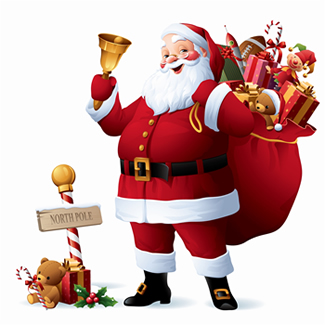 Santa Claus and Sinterklaas are similar in ways that they are responsible for bringing holiday cheer and gifts to children around the world. They also both carry a big book that tells them about children who are naught and nice. However, there are many differences between the two. While Sinterklaas comes from Spain to Netherlands in November and is celebrated with a huge feast on 6 December, Santa Claus resides in the North Pole and goes to everyone’s homes on 24 December. On 25 December people celebrate the day with mass and celebrations such as feast and sharing gifts with families.

Sinterklaas is more of a serious man that resembles a clergyman, while Santa is a jolly man who loves to laugh. Santa travels using his magic reindeer-drawn sleigh and Sinterklaas travels first via a steamship to Netherlands and then travels in Netherlands on a horse. They also have different helpers, Santa has a horde of elves to help him make and pack gifts and Sinterklaas has someone known as Zwarte Pieten (who are described as small blackmoors). Also, Sinterklaas is considered as far more strict than Santa. According to old songs about Sinterklaas, he punishes the naughty children with either beating them using bundles of small branches or taking them back to Spain. Santa Claus only leaves the naughty children coal.

Comparison between Santa Claus and Sinterklaas: