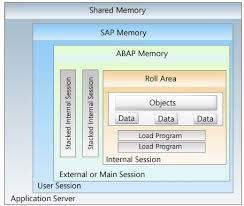 SAP memory describes a memory area to which all main sessions within a SAPgui have access. SAP memory uses  the commands set parameter and get parameters for passing data from one session to another. Data can be passed from one program to another within a session and also from one session to another. It serves as the only connection between the different sessions within an SAP GUI. Due to its scope, it is also known as global memory. It remains available to a user throughout the duration of a terminal session.

ABAP memory is different from the SAP memory, as it can be considered as a local memory. It is used for passing data across internal sessions. It makes use of import and export comments to read and write data to the ABAP memory. Data has no effect during the program calls, and thus it remains intact.  SAP is regarded to be the global memory, whereas ABAP memory is called local memory due to its limited scope. ABAP memory has an advantage of being independent of the ABAP programs or objects that generate it. Therefore, it can transmit values across different object or programs too.

Both SAP and ABAP memories can be utilized by ABAP (Advanced Business Applciation Programming) programs. The main difference between these two memories is regarding the scope. ABAP can be onsidered as a limited type of memory in comparison to SAP memory.