Difference between iPad and iPod

Key difference: The iPod is a series of portable media players, also commonly known as mp3 players. The iPad, on the other hand, is a tablet. They are all designed and marketed by Apple Inc., the company famous for its iPhones. 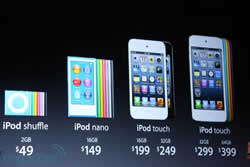 The iPod is a series of portable media players, also commonly known as mp3 players. They are a brand designed and marketed by Apple Inc., the company famous for its iPhones. There are various types of iPod available in the market, from the iPod Classic, to the tiny, iPod Shuffle, the iPod Nano, and the full-screen iPod Touch.

The iPod was first released on January 9, 2001, along with the company’s iTunes application. An updated version of this iPod is now known and sold as the iPod Classic. The popularity of the iPod was then followed by the iPod Shuffle, which was essentially tinier and cheaper. The iPod Shuffle also lacked the screen, a distinctive feature on the iPod. The iPod Shuffle was touted for its functionality and its tiny size which made it easier to carry.

The iPod Nano is essentially a compact version of the iPod Classic. The iPod Touch, on the other hand, is a full-screen media player. In addition to playing music and videos, the iPod Touch also has access to the App Store, where one can download various apps, including games, productivity apps, and social networking apps, such as Twitter, Skype, etc. Basically, it can be said that the iPod Touch is practically the iPhone, just without calling capabilities. 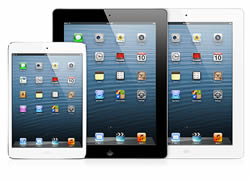 The iPad, on the other hand, is a tablet. In fact, iPads practically stared the modern trend of tablets. The key distinguishing features of an iPad are that the devices have bigger multi-touch screen, a virtual keyboard, Wi-Fi connectivity, and on some models, 3G cellular connectivity. The iPad has a 9.7 inch screen, the later versions with Retina Display, whereas the iPod Touch has a 4.86 inch screen; the other iPods even smaller. The iPod Shuffle does not have a screen at all.

Other than the screen, the iPad and the iPod Touch are quite similar. Both can shoot video, take photos, play music, send and receive email, and browse the web, among other things. Both can also be used for gaming, GPS navigation, social networking, and as an ebook reader. However, the iPod Touch has a smaller screen which can make operating some of these features difficult. The other iPods, on the other hand, can only be used to play music and videos. The iPod Shuffle cannot even play videos, as it does not have a screen.