Difference between Toaster and Toaster Oven

Key Difference: Toasters have been a popular appliance since its launch. Almost all older movies and television shows have a glimpse of the old toaster as a faithful appliance to make bread crispy. That is the main objective of a toaster, to toast bread and other bread products. Toaster ovens are ovens that are small electric ovens that have a front door, removable wire rack and removable baking pan.

Toasters and toaster ovens are quite similar in nature, with a few distinct differences. While, the primary objective of a toaster is to toast bread slices and other bread products, toaster ovens can do much more. Toaster ovens have additional features that allow it to toast, bake and broil. This makes it a more all-round appliance, thus eliminating the need of having a separate toaster and a separate oven for baking. 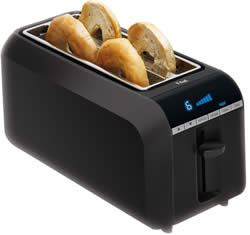 Toasters have been a popular appliance since its launch. Almost all older movies and television shows have a glimpse of the old toaster as a faithful appliance to make bread crispy. That is the main objective of a toaster, to toast bread and other bread products. Toasters can-be two slice or four-slices, which just states how many slices can the toaster toast at a time. They run on electricity and have a crispness meter that allows the user to set how crispy they want their toast. The toaster takes about 1-3 minutes to toast the bread and the bread product depending on what the number the meter is set on.

The first toaster that was invented was not at all the toaster that we use today. It was a long-handled toasting fork, which allowed uses to put the slice of bread on the fork and toast it on an open flame. The first electric toaster was created by Alan MacMasters in Edinburgh, Scotland, followed by Stephen J. Cook & Company in UK in 1893. These toasters had an electric, iron-wiring frame. There were various other attempts at trying to create a working electric toaster. General Electric filed a patent in 1909 for a toaster, claiming it to be the "the first commercially successful electric toaster."  In 1913, Lloyd Groff Copeman and his wife introduced a new toaster that had the ability to automatically turn the bread. Before this, the bread would be toasted on one side and would have to be manually turned. The pop-up toasters that we know now came about in 1919 and the design was patented by Charles Strite. The toasters have are being introduced today does not even require the owner to pull down the lever; it has the ability to automatically do that when the bread is placed in the slot. Toasters are also available in various designs, patterns and even funky ways to imprint images on the bread.