Difference between Twins and Clones

Key Difference: Twins are when a woman gives birth to two babies in the same pregnancy. Cloning is the process by which a scientists and doctors create an exact genetic copy of an organism.

Twins and clones are a very delicate issue, especially when it comes human cloning, which is under research and debate. Though twins and clones resemble their counterparts, they differ from each other in many ways, most commonly in their genetic buildup. In twins, there are two different types: identical and fraternal. Of these, only the identical resemble their twin in looks. 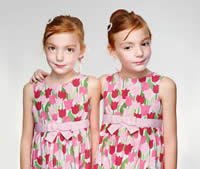 Twins are when a woman gives birth to two babies in the same pregnancy. Twins can be of two types: fraternal and identical or in technical terms dizygotic and monozygotic respectively. When a woman conceives one child, there is one zygote that is fertilized by one sperm, resulting in a baby. Now in case of fraternal twins, there are two zygotes are the simultaneously released from the ovaries and two different sperm cells fertilizes these zygotes, producing two embryos. In case of identical twins, one zygote is fertilized by one sperm cell; however the zygote splits and forms into two embryos. This is the reason why the identical resemble each other in looks, while fraternal twins seem related. The splitting of the zygote into two separate embryos is a random event and is not a hereditary trait. Monozygotic twins can also be created artificially but splitting the embryo and is commonly used in IVF (in vitro fertilization). Fraternal twins differ from each other genotypically and phenotypically.

The other two variations are monozygotic ("identical") twins:

Cloning is the process by which a scientists and doctors create an exact genetic copy of an organism. Cloning includes creating copies of DNA fragments cells (molecular cloning) or organisms (cell cloning). It is also used in technology to refer to creating copies of digital media or software. The term cloning is derived from the Ancient Greek word “klōn’ meaning twig to refer to the process of producing a whole plant from a twig. Cloning has become popular in attempts to try and recreate DNA structures in order to cure diseases.

Molecular cloning is when making multiple molecules. This cloning is commonly used to amplify DNA fragments containing whole genes, and also includes amplifying DNA sequence such as promoters, non-coding sequences and randomly fragmented DNA. Cloning happens in four steps: breaking apart a DNA strand (fragmentation), gluing back together DNA in the desired sequence (ligation), inserting the sequence with new DNA (transfection) and selecting the selects that were successfully transfected (screening/selection).

Cloning is painfully expensive and cannot always guarantee result in the embryo turning into a baby. Successful cloning has happened with animals, but no cloning has been successful within humans. Cloning involves three individual animals, where the nucleus of an egg cell from one individual is removed and replaced with the nucleus of the second individual and implanted into a third individual, the resulting clone will be identical to the second individual. Much of the process happens in a petri dish or science labs.

Another form of cloning includes using somatic cells. Unlike germ cells that have one set of chromosome, the somatic cells have two sets of chromosome. The germ cell’s nucleus is removed and the somatic cell’s nucleus is isolated and then inserted into the germ cell. The cells are made to fuse, resulting in the cells to turn into a zygote. There are two types of cloning therapeutic cloning or research cloning or reproductive cloning. In therapeutic cloning, embryos are being produced in order to study human development and to understand and treat rare diseases. Reproductive cloning is done in order to provide offspring to the people who cannot have kids.