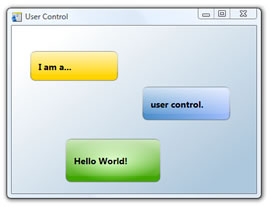 Basically, a control is a fundamental user interface object. In ASP.net, controls are often classified into user and custom controls. User controls provide the reusability of design and are created in the same way as a web form. They have an .ascx extension. User controls are quiet helpful if they have to be used only for a particular website. They have a visual interface. These controls are loaded at the runtime, and thus cannot be found in the toolbox.

On the other hand, custom controls are developed or created by coding. They are created according to the requirement of the business. They are quiet useful as they can be used across different applications. They do not have a visual interface. These controls can be easily added to the toolbox. Custom controls are often preferred as they can be shared across web applications, however the absence of visual designer for creating custom controls is often regarded as a limitation.

User Controls must be preferred to divide the functionality into manageable pieces of logic. These pieces can be created without any kind of dependence on the application or on other controls. They are also extensively used to group the related components for the reusability purpose. On the other hand, custom controls are preferred for creating a particular version of a control. They are quiet helpful in providing the extended capability to the basic controls.